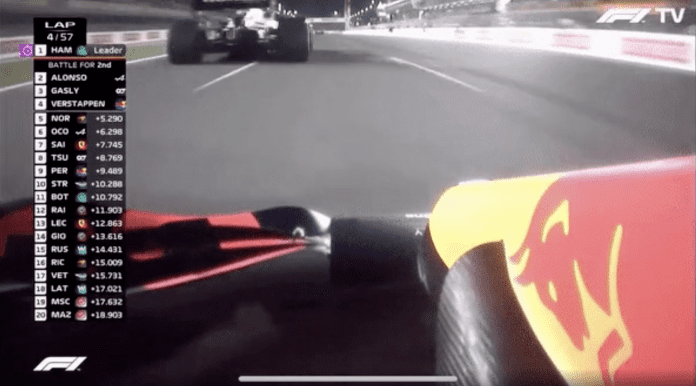 The Qatar Grand Prix has added more spice to what is already a heated affair at the top of the F1 drivers’ standings. With just 2 races to go, Mercedes driver Lewis Hamilton is now only 8 points behind Max Verstappen.

While Max Verstappen was handed a grid penalty that saw him start the race from seventh position, he recovered well to end the night just behind Hamilton. Verstappen will be further buoyed by the fact that he also managed to pick up an additional point for the fastest lap.

It may not have been completely smooth sailing for Verstappen though, as some new footage has emerged on a Reddit thread that shows Pierre Gasly letting the Dutchman overtake him during lap 4, as he left his DRS closed and only activated it once the Red Bull racer was ahead of him.

AlphaTauri’s Gasly started the race in second place. He lost a place quite early on and then was overtaken by Verstappen on the 4th lap.

Fans have caught on to what seemed like Red Bull’s sister company having some pretty clear instructions from the top bosses. One fan said, “Calling it now, Gasly is the Saudi Assassin who is going to take Lewis out in the next race for a RB and Max double championship.”

It can be argued that this instruction was indeed handed out by the Austrian company and Gasly eventually ended the race in 11th position. He is currently 9th in the drivers’ standings.

With the gap between Verstappen and Hamilton now just 8 points, there is a realistic possibility that the British driver can go on to usurp Verstappen in the final two races and bag a record 8th world championship.

Hamilton is currently tied on 7 world titles along with the legendary German driver Michael Schumacher.

Verstappen happy with the result

Verstappen, meanwhile, will be happy he managed to cut the margin of defeat and even bag the point for quickest lap. He will, however, know that things could get tougher in the final two races, especially because the tracks are believed to be better suited to Mercedes.

“Once I know I was starting seventh I was just very motivated to move ahead and that’s exactly what we did,” said the Dutchman.

“We had a good first lap and then after five laps we were second again and I just tried to keep the gap small which we did throughout the whole race so they couldn’t do an extra stop – and it gave me the fastest lap at the end so I was definitely happy with that.

“We just didn’t have the pace this weekend to match them [Mercedes]. I did the fastest lap – at the end of the day it was still one extra point and everything counts at the moment – but this weekend wasn’t the best for us.

“We just need to try and stay focused and there are two races to go and as you can see a lot of things can happen. Anything is possible.”

Read more: Masi shoots down Hamilton’s FIA accusation – “I’m not the one sitting as judge and jury”