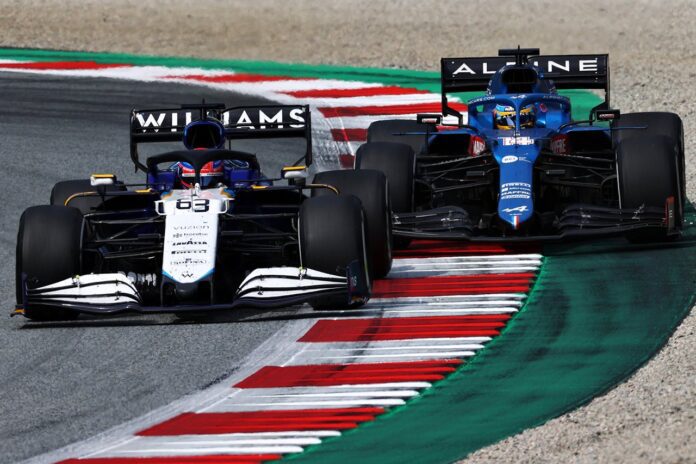 The Austrian Grand Prix was something worth tuning into. Not a moment went by when the situation on track was not intense.

Fernando Alonso and George Russell‘s race kept fans glued to the edge of their seats as the two drivers fought it out for P10.

Finally, the F1 veteran managed to secure the spot leaving Russell with a P11 finish.

The two drivers were among the few who had a clean tussle during the race.

Most of the fights led to cars being parked on the gravel or others getting penalized.

On lap 68, the Alpine was in DRS range and was close to the Williams to overtake at Turn 4.

For 10 laps, Russell tried to stay ahead of Alonso to try and get a point finish.

During the cooldown lap, Alonso went on to wave at Russell and even gave him a thumbs-up for his driving.

After a productive weekend, fans were rooting for Russell. Despite a rough start to the race, he managed to fight back hard.

“So close yet so far,” he concluded.

Back on the pit lane, Alonso consoled Russell by giving him a hug.

The lack of animosity between the two drivers is a mark of how much they respect each other.

Even though Russell has not been able to score any points till now, he has shown amazing driving skills often finishing way ahead of teammate Nicholas Latifi.

Alonso reckons that Russell might just be a future champion in making especially after his drive for Mercedes back in Bahrain.

“The opportunity with the Mercedes… I think it was a real opportunity for everyone to watch what a driver with the talent of George can do with a winning car,” he said.

“He nearly won the first race at the first opportunity he had.

“That, I think, was proof for many people, not only a few, that we knew how good he was; that race in Bahrain was enough to open [the eyes] of millions of people,” he concluded.

There are rumors that Russell will fill in for the second seat at Mercedes. That could prove Alonso right.