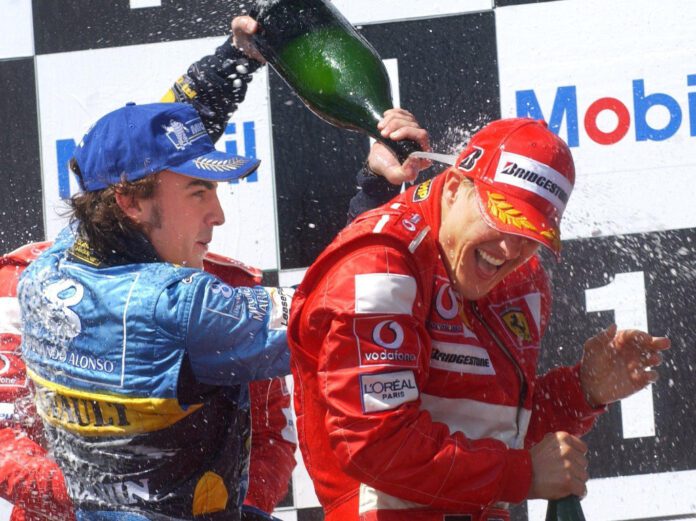 Alpine driver Fernando Alonso is one of the most seasoned drivers on the grid today. He won the championships of 2005 and 2006.

He entered Formula 1 back in 2001 after a debut with Minardi.

Additionally, he also had the privilege to battle one of the greatest drivers of all time, Michael Schumacher.

Alonso understands that Schumacher is among the most skilled drivers ever.

The Spaniard also reveals that his victories against the Ferrari driver were significant as he won the races when it was crucial.

‘Michael is a legend of the sport’

According to Planetf1, the two-time world champion is under the impression that Schumacher is worthy of a different kind of respect in comparison to other drivers.

He also revealed that he has learned a lot from the Ferrari legend when he first got into the sport.

“Michael is a legend of the sport,” said the Alpine driver.

“I learned a lot from him in 2001 through to 2004 and then in 2005 and 2006, I was fighting side by side and wheel to wheel with Michael. You have to respect in a different way Michael than any other driver.

“Those kinds of moments and shaking hands, things like that, they were a moment of relief because we were fighting hard on the track, but there was still a human behind that red helmet.” said Alonso.

Alonso revealed that he was over the moon after winning his first championship back in 2005. However, he did not celebrate the victory immediately.

Soon after winning, he was already planning out his next race, he revealed.

“It’s one of those moments that you reach the target of your life,” Alonso said.

“I was 24, 25 years old so you cannot be more happy, proud and it seems there is no more after that you can wish for. [But] you are wrong because immediately at the next race there is another target, another wish and you are thinking something different.

“But at that time, that hour or hour-and-a-half of celebration, you are over the moon.” said the Spanish driver.

The future of Alonso

Fans are waiting to see what the Spaniard has held in his tank. His best result this year has been at the Hungarian Grand Prix where he recorded a fourth-place victory.

While he is a seasoned driver, we can only wait and see how the Alpine driver performs in the second half of the current season.