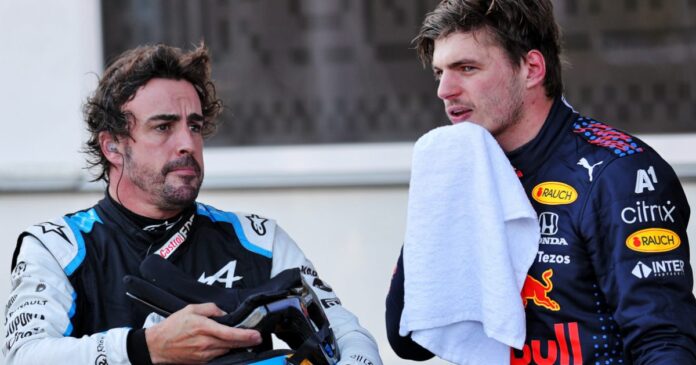 During the press conference ahead of the Austrian Grand Prix, Fernando Alonso was paired up with Max Verstappen for the interview.

Alonso, one of the oldest drivers on the grid, and Verstappen, among the youngest, raised some intriguing points about the sport.

Even though the age difference between the two drivers is almost 16 years, Alonso hinted that they might team up in the future.

The Spaniard is among the top drivers to race on the grid.

Even though he fought off Michael Schumacher, he won back-to-back world championships in 2005 and 2006 with Renault.

Additionally, Alonso was also the youngest world champion in the history of the sport for a brief period of time.

Verstappen as a teammate

Even though Alonso is far from challenging for wins and podiums, Verstappen is leading the pack right now.

The Dutchman has a lead of 18 points ahead of Lewis Hamilton.

With the 23-year-old dominating the grid at the moment, Alonso thinks that he could have the Dutchman as his teammate in the future.

However, that would be possible outside of Formula 1.

The 39-year old said, “I think it can happen in the future, but not in Formula 1. Maybe in Endurance and Le Mans.”

Prepping for the double-header

While Alonso has experience driving on multiple race tracks, he is yet to drive on the same track twice.

But the Spaniard is keen to try out his hand on the experience.

He said: “[It] is the first time that I run two races in a row on the same track in F1. We will also see the weather if it turns out to be more variable than the previous weekend.”

With a P9 finish at the Styrian Grand Prix last weekend, Alonso will want to keep up the pace this time also.

With a chance of wet weather looming over the grid, the challenge will be high for the 39-year old.