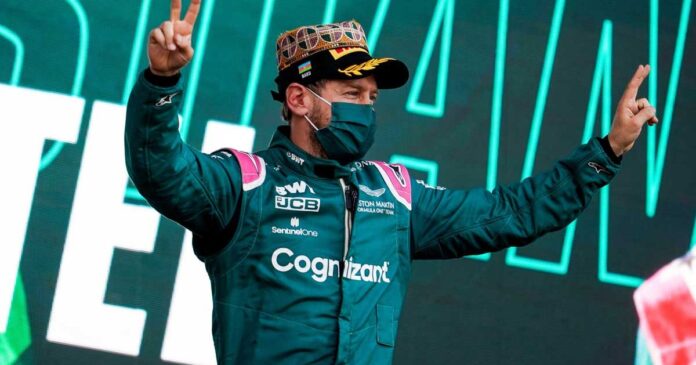 Aston Martin driver Sebastian Vettel has finally brought out his old form, especially during the last two races in Monaco and Baku.

While he might not have got a victory at the Azerbaijan Grand Prix, he sure did manage to score a podium finish.

His former employer Ferrari expressed its happiness towards Vettel.

Vettel had it tough at Ferrari

Sebastian raced for Ferrari from 2015 to 2020. However, during his time wearing the scarlet overalls, he had a tough time, especially towards the last two years.

Currently with Aston Martin, the German has had a refreshing change which helped him score the maiden podium for his team.

While he did struggle initially, they say that the sixth time is a charm.

The four-time World Champion got Aston Martin their first podium while he score his 122nd.

When Vettel was with Ferrari, his then-teammate Charles Leclerc would often make things difficult for the German.

However, in Baku, Vettel was able to beat his former teammate, which added to his glory.

Sebastian started the race from P11 but was able to make his way up the grid to finally claim the podium.

Ferrari Team Principal Mattia Binotto was surprised by Vettel’s performance and expressed his thoughts on the situation.

“It was definitely a special race,” he said.

“We are happy that Seb came in second, he deserved second place. As Ferrari fans, I think we’re happy with the result he got.”

Binotto was, however, not very happy with his own team’s performance stating that they could have had a better race.

Leclerc, even though he started from pole, ended up in fourth place and Carlos Sainz managed to finish in eighth place.

Ferrari, despite an average performance in Baku, is currently third in the constructor’s championship.

“It was clearly his fault”: Perez gets first taste of Marko...