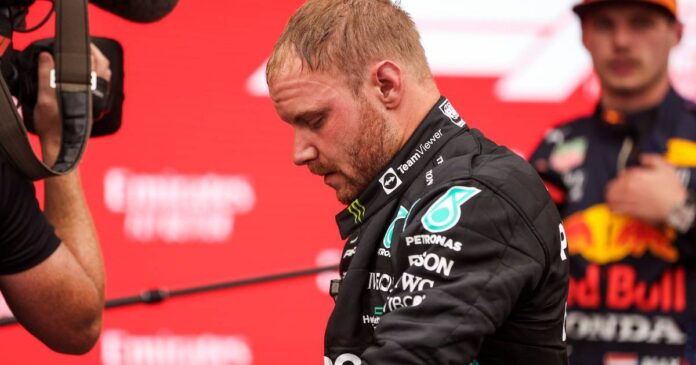 Ever since he joined Mercedes back in 2017, Valtteri Bottas has been facing the toughest part of his career so far with the outfit.

With seven races already over, the Finn has managed to score only 59 points and is trailing well behind his teammate Lewis Hamilton.

Additionally, there are rumors floating around stating that George Russell might replace Bottas in the upcoming season.

For the last couple of seasons, Bottas has been the only driver to actually challenge seven-time world champion Hamilton, especially with Red Bull lacking in their car.

However, this season is different as Max Verstappen is proving to be a lethal contender against the Brit.

Even though he scored three podiums, Bottas is far from these two drivers.

With the Finn struggling, Mercedes have not been very fair to the driver in their comments against him.

What did Montoya say?

He said, “Instead of working together and saying, ‘we had an issue,’ they went afterwards and said, ‘Oh, you know he just didn’t stop in the right place’ instead of going, ‘Oh, maybe the guy with the gun didn’t put the gun completely straight.’

“So, it just seems, I think, in his mind they’re attacking him.”

Mercedes have to take a call for Bottas

According to the Colombian, it will be better for the team if Mercedes take a final call with respect to Bottas. This will help the Finn stay focused on the track rather than off it.

“They either commit to him and say, ‘Look, we’re with you and things will get a lot better,’” said Montoya.

“Because it will make the relationship a lot easier once the decision is made,” he concluded.

At the moment Bottas has his focus set on the Styrian Grand Prix where he finished second the last time he raced here.

Read More: Daniel Ricciardo rates his performance out of 10 with respect to Lando Norris