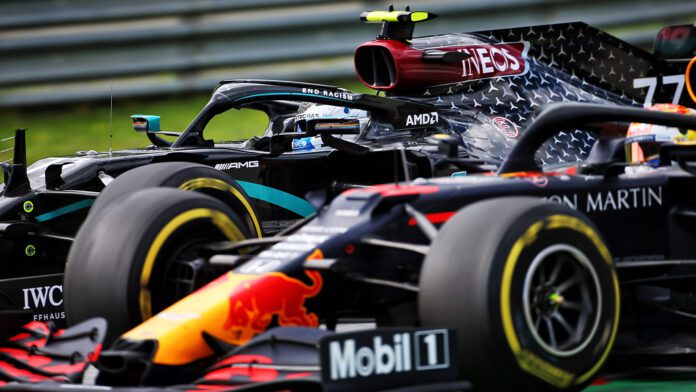 Mercedes have been dominating Formula 1 for the last seven years. As a result, no one could have predicted Red Bull‘s current position.

The Austrian outfit have managed to score six wins in nine races so far and have a significant lead in both the standings.

After the end of the triple-header which concluded with the Austrian Grand Prix, former F1 driver Damon Hill believes that Red Bull have not yet unleashed their full potential.

Red Bull has a trick up its sleeve

Even after the Dutchman stopped for a second set of tyres, he managed to finish 17 seconds ahead of Mercedes’ Valtteri Bottas.

Additionally, he also took the point for the fastest lap.

This has placed the Red Bull driver 32 points ahead of Lewis Hamilton.

As a result, Hill thinks that it will be difficult to beat Red Bull.

What did Hill say?

The former Williams driver thinks that Red Bull, for the moment, are a class apart.

“He’s [Max] in another class but so is the team. That car is absolutely brilliant,” he said.

He also is under the impression that Red Bull have not yet revealed the full strength of their machine.

“I thought Red Bull are getting to the point now where they’re not showing their hand or their advantage unless it’s absolutely necessary. And their advantage in the race was huge. He just could fit in another pit stop over Mercedes,” he stated.

The 1996 F1 world champion added that looking at Sergio Perez‘s qualifying, he is a highly capable driver.

“He actually, very nearly missed out on pole position. Because Lando, if you looked back at the replay back with Karun [Chandhok] showing exactly where they were in relation to each other, Lando was ahead for most of the lap except for the last corner.

“Lando said, ‘Well that was because their car is better.’ So, Max was able to get the last corner right and actually gave him a huge advantage.

“What he’s saying is he drove better than Max did, but Max actually said he didn’t think it was a particularly good lap,” he concluded.

Verstappen is a much capable candidate for the win at the upcoming race in Silverstone. However, Mercedes are expected to fight back strong.