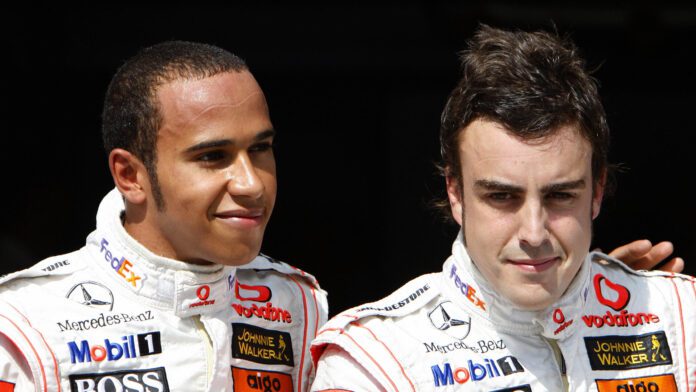 Former Mercedes boss Norbert Haug has disclosed that he ended up feeling like an idiot after McLaren pair Lewis Hamilton and Fernando Alonso fell out back in 2007.

After winning two championships in 2005 and 2006 with Renault, Alonso was signed with McLaren to partner then-rookie Hamilton.

The two drivers performed spectacularly throughout the season. However, Kimi Raikkonen took the title win by a single point at the season finale in Brazil.

What did Haug say?

“We could have achieved more, that is for sure,” Haug said. “We could have done it easily without the Hungary saga in qualifying.

“This was one of the reasons… I mean there were several reasons why we missed this championship and we got punished because both drivers missed [out] by one point in the end.

“If you write it down for a movie people would say forget it, nobody would believe that.

“I expected them to be strong and in fairness to Fernando, if you have two world championships under your belt in 2005 and 2006 and you come to a team that looks like one of the winning teams, then you are not expecting a newcomer coming and blowing my socks off.

“Lewis didn’t blow his socks off but it was a level playing field between them and I remember races like Indianapolis that year and how they battled on the straightaway.

“It was entertaining for you guys but in the pits, it was breathtaking but a very special form of high-level entertainment. We could have made more out of it,” he continued.

Alonso and Hamilton reached the peak of their debacle at the Hungarian Grand Prix during qualifying.

There was an agreement beforehand on the order of which the two drivers would leave the pits and attempt their laps. Hamilton broke this order.

The Spaniard ended up waiting in the pits after refueling and tyre change and did not leave the box until after some time the lollipop was lifted.

As a result, Hamilton was unable to reach the finish line to start a final lap. This led to major outrage between the two drivers.

I suffered a lot at the time: Haug

Haug was asked if it was a difficult task to manage the two drivers.

“Not really, there was a period of time, of course, where there was not lots of talking between the drivers but I think we rebalanced it quite well,” he said.

“We turned it around very often. Sometimes Ron [Dennis – former McLaren boss] did the press briefings and sometimes I did and, this was not my purpose, but I think it was my turn in Hungary.

“I looked like an idiot, of course, but how can you explain things like this. Certainly not our best qualifying experience but very remarkable indeed.

“I do not suffer today but I suffered a lot at the time because normally, you should beat your competitors and not beat yourself. Beating yourself is a lesson I learned as well a thousand times as much,” he concluded.