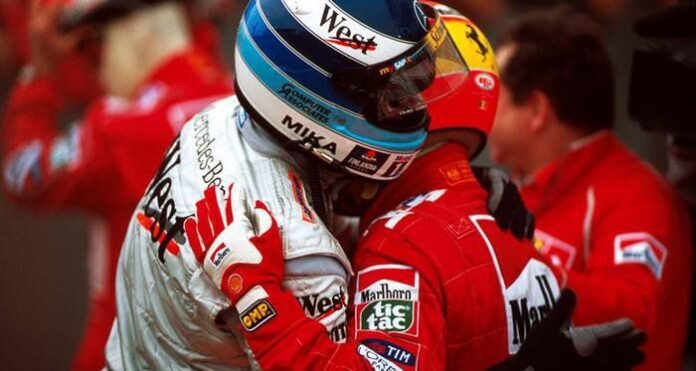 Had he joined the outfit, he would have partnered with his arch-rival Mika Hakkinen.

Haug was associated with McLaren in the late 90s and early 00s.

With their cars driven by Mercedes power, they were involved in a number of battles with Michael Schumacher and Ferrari.

Among the top rivalries to ever take place in Formula 1, Hakkinen VS Schumacher probably leads the list.

Mika additionally took the 1999 victory ahead of Eddie Irvine in the other Ferrari. This was after Schumacher had a leg break early in the season.

While the two of them being in the same team is the stuff of fantasy, Haug reveals that it could have been possible.

What did Haug say?

“I knew Michael from when he was a Formula 3 driver when I was a journalist, and he came to Mercedes before I was there – he was already there as a junior,” he said.

“We were fierce competitors, but at the race track and in the paddock, we always had a good relationship.

“I joked that we needed to do it [race] together sometime. There were some secret negotiations in 1998 but it never came together.

“In theory, it could have happened, but it didn’t come together – it is what it is. It wasn’t something that was completely impossible because we [McLaren] were really good in ’98 with the new formula, Adrian Newey car, so it was attractive for any driver.

“It was a great period of time and it was a very intense fight, best described with the 2000 race in Spa, with the two guys [battling],” he concluded.

Could have been a brilliant fight

The two of the greatest drivers battling it out in the same team would have been something worth watching.

But if this pairing had happened, we would have never witnessed Ferrari and Schumacher’s dynasty.

While it would have been exciting to see the two drivers in the same team, we are glad about what we got instead.