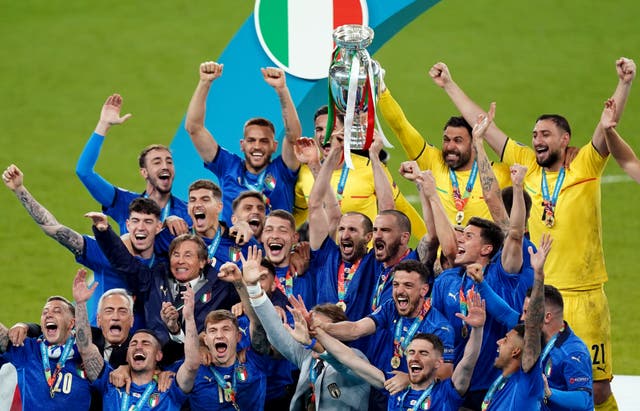 Last evening was the football final between Italy and England as a part of the Euro 2020 final and Formula 1 drivers tuned into the action.

The last few weeks have been difficult for the drivers after a triple-header concluding with the Austrian Grand Prix.

This gave them a break from their routine to enjoy some great football action.

The teams also participated in the banter with some European Championship jokes through their social media.

At the Goodwood Festival of Speed, Mercedes pasted stickers of the English football team on the Ferrari bus.

Additionally, McLaren also taunted Ferrari by waving the English flag when their car drove by.

Red Bull took the opportunity to play the English National Anthem within the paddock.

Italian driver competing for Alfa Romeo, Antonio Giovinazzi was over the moon after his team won 3-2 in the penalty phase.

Congrats on the win Italy. You did us proud @England 👏

McLaren-driver Lando Norris had the opportunity to attend the match at Wembley.

Unfortunately, he did not have much luck in watching his team win. Norris, however, was proud of his team.

George Russell was consistently updating his experience on social media.

He wrote that he is proud of the team and asks them to hold their heads up high.

In his Instagram stories, Lewis Hamilton also expressed that he is proud of the English team.

Read More: Nico Hulkenberg predicts friction between Haas drivers – “You only fight against your teammate”