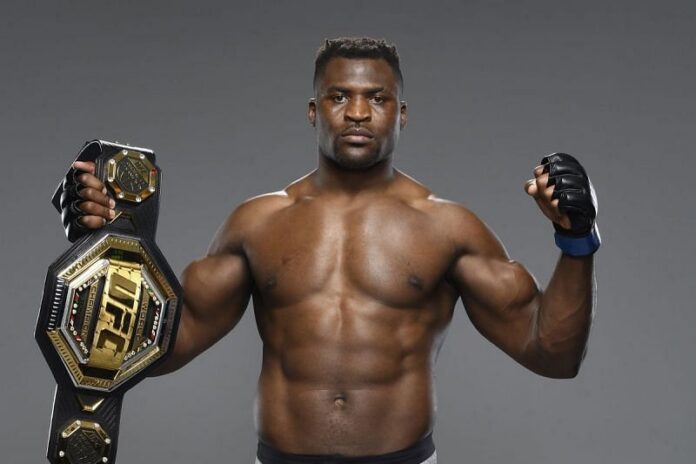 Francis Ngannou is a Cameroonian MMA fighter. He currently competes for the Ultimate Fighting Championship (UFC) in the heavyweight division, where he is the reigning UFC Heavyweight Champion.

He is well-known for being the most powerful recorded puncher in UFC history. Ngannou is estimated to have a net worth of $4 million.

Ngannou was born and raised in the Cameroonian village of Batié. He grew up in poverty and received little formal education. Due to a lack of funds, Ngannou began working in a sand quarry in Batié. He speaks several languages such as Ngemba, French, and English.

In his village, he was approached by several groups to join them. He was motivated to bring a positive change in his life and decided to pursue boxing. Despite his family’s initial reluctance, Ngannou began boxing training at the age of 22. Ngannou had been training for a year when he was forced to stop due to illness.

He worked odd jobs to make ends meet until, at the age of 26, he decided to move to Paris, France, to pursue a career in boxing. However, once in Europe, he was imprisoned in Spain for two months for illegally crossing the border.

Ngannou arrived in Paris with no money, no friends, and no place to live. After living on the streets of Paris as a homeless person, he was introduced to Fernand Lopez and the MMA factory by a friend.

Lopez provided Ngannou with MMA equipment and allowed him to train and sleep at the gym for free, kicking off Ngannou’s MMA career.

Ngannou began his MMA career in 2013 and participated mostly in the French promotion 100% Fight. He also fought in other regional promotions in Europe.

Francis made his UFC debut in 2015 against Luis Henrique. He secured a win via second round knockout. After that, he faced Curtis Blaydes in April 2016 at UFC Fight Night 86. He won that fight via TKO.

After that, he participated in a slew of impressive fights. He holds a 15-3-0 record in his MMA career. He became the UFC Heavyweight Champion after defeating Stipe Miocic.

As mentioned earlier, Ngannou debuted in MMA in November 2013.

On December 19, 2015, at UFC on Fox 17, Ngannou made his UFC debut against fellow newcomer Luis Henrique. In the second round, he knocked out the opponent.

On December 9, 2016, at UFC Fight Night 102, Ngannou faced Anthony Hamilton. He won the fight via first-round submission and earned his first UFC Performance of the Night bonus.

Ngannou faced veteran Alistair Overeem in a rather high-profile fight of his career on December 2, 2017 at UFC 218. In the first round, he knocked out the opponent. This knockout is regarded as one of the greatest and most brutal knockouts in history.

On January 20, 2018, at UFC 220, Ngannou faced off against Stipe Miocic for the UFC Heavyweight title. He was defeated by unanimous decision.

Miocic and Ngannou met for a rematch for the UFC Heavyweight Championship on March 27, 2021, at UFC 260. Ngannou won the fight by knockout in the second round. This victory earned him the award for Performance of the Night.

Ngannou went for the kill in the second round, landing left hands after left hands until the always tough Miocic finally dropped. Things came to an end with a series of hammer fists on the ground.

Ngannou credited the lessons he learned in his first fight with Miocic, which Miocic won by unanimous decision, with assisting him in determining where he needed to improve.

Ngannou fought Derrick Lewis at UFC 226 on July 7, 2018. He was defeated by unanimous decision. The lack of offence from both competitors was heavily criticised by the media and fans, and the fight was dubbed a “snoozefest.”

After winning the heavyweight title against Stipe Miocic, Ngannou was set to defend his title against Jon Jones. However, due to a dispute between Jones and UFC over his pay issues, it was declared that Jon Jones would not be fighting against Francis Ngannou.

UFC President Dana White has made it clear that the promotion has been working on finalising a bout between Francis Ngannou and Derrick Lewis. However, no dates has been announced as of now.

On 10 April 2016, at UFC Fight Night 86, Ngannou faced UFC newcomer Curtis Blaydes. He won the fight by TKO at the end of the second round.

Ngannou fought Curtis Blaydes in a rematch in the main event of UFC Fight Night 141 on November 24, 2018. He won the fight by TKO in the first round. He also received a Performance of the Night bonus as a result of his victory.

On February 17, 2019, Ngannou headlined the UFC’s inaugural event on ESPN, UFC on ESPN 1, against another former UFC champion, Cain Velasquez. In the first round, he knocked out the opponent.

Ngannou was supposed to fight Jairzinho Rozenstruik on March 28, 2020, at UFC on ESPN: Ngannou vs. Rozenstruik. The event was eventually cancelled due to the COVID-19 pandemic. The fight has been rescheduled for April 18, 2020, at UFC 249. The fight eventually took place on May 9, 2020. Ngannou won by knockout in the first round after only 20 seconds. This victory earned him the award for Performance of the Night.

He is the founder of the Francis Ngannou Foundation which operates the first MMA gym in Cameroon. His foundation strives to offer facilities to young people to train themselves.

“That ultimately decided it for me”: Usman reveals why he chose...