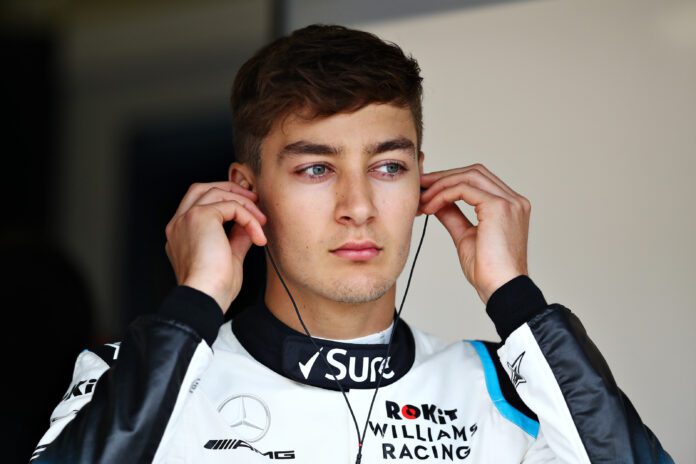 With the paddock moving on to Silverstone for the next race, there are a bunch of rumors surrounding George Russell joining Mercedes.

There were talks stating that during the British Grand Prix, the position for the second seat of Mercedes will be announced.

However, all these rumors were put to rest by the British driver himself as he confirmed that there will be no announcement in Silverstone.

The 23-year-old driver has been a part of the Mercedes junior driver program. This means that he could be driving for the Silver Arrows in the near future.

Also, by the end of this season, Russell’s contract will his current team, Williams is set to expire.

This gives the Brackley-based outfit a great chance to grab the young driver.

Russell confirms that there will be no announcement

During a podcast, Russell was asked whether he will be joining Mercedes soon.

“I signed with Mercedes five or six years ago, now that is a hundred percent true! As everybody knows, they look after me,” Russell laughed and stated.

“With regards to my drive for next year, nothing has been signed nor sealed and nothing will be announced in Silverstone.

“I can let you know that,” he concluded.

Lewis Hamilton recently signed a contract with Mercedes that sees him drive for them for the next two years. However, the second seat lies empty.

Valtteri Bottas, the current driver, will see his contract coming to an end by the end of this season. He has not yet been offered any updates regarding his extension.

Similarly, Russell’s contract with Williams is also set to expire by the end of the season.

So we can only wait and see who the second seat will go to.

Team boss, Toto Wolff was asked to clear the air regarding the second seat with the Silver Arrows.

“We always said we wanted to give it the next few races to gain more clarity. [We are] also happy Valtteri’s racing in Austria in my opinion was really good and he needs to consolidate that. He’s a known factor,” he stated.

“In the same way we know the strengths and weaknesses of George, and that decision is going to be made during the summer. First [we will have] discussions with George and Valtteri and then hopefully we are sorted before the end of the season.

“First [we will have] discussions with George and Valtteri and then hopefully we are sorted before the end of the season,” he concluded.

Who will take over the second seat with Mercedes – Bottas or Russell?