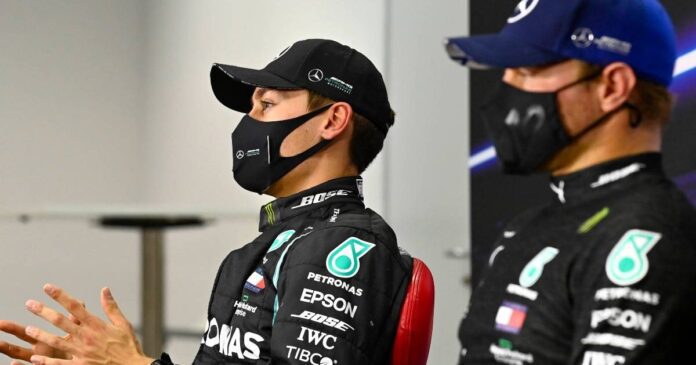 Williams driver, George Russell could be in line to fight for the Mercedes seat in the upcoming 2022 season against Valtteri Bottas.

Russell gave a vague reply when he was asked about the prospect of partnering with Lewis Hamilton next year.

While there are rumors about the confirmation of Russell’s seat with the Silver Arrows in place of Bottas.

Currently, Bottas is way behind Hamilton on the driver’ standings. This just makes things difficult for the outfit if the Brit were to call it quits.

Hamilton’s retirement, however, has been delayed considering the fact that he has just extended his contract by two years until 2023.

With Bottas’ contract ending by the end of this season, a second-seat re-shuffle at Mercedes would be wise.

“I am not one to believe in luck. To be honest, you make your own luck,” said the Williams driver.

“You are where you are because of what you achieve and what you accomplish, whether it is on track or off track.

“That’s my mentality and I’m not relying on luck for anything. I’m not hoping that everyone crashes and I win the race.

“I’m relying on me doing the best job possible with the team,” he explained.

Last time in Austrian, Russell managed to finish a disappointing P11 and narrowly missing out on a points finish for Williams.

After replacing Hamilton back in Sakhir last year, Russell was on his way towards a sensational victory.

However, a puncture ended his race and his hopes to score a win for Mercedes.

Former world champion Damon Hill has predicted that Russell has been confirmed with Mercedes.

Martin Brundle has suggested that the switch could happen by the British Grand Prix.

If he were to miss out on a seat with Mercedes, it could just be a hindrance in his journey towards the top.

Read More: Fernando Alonso’s return to F1 was always linked to 2022 season – “We fight to always be in the mix”