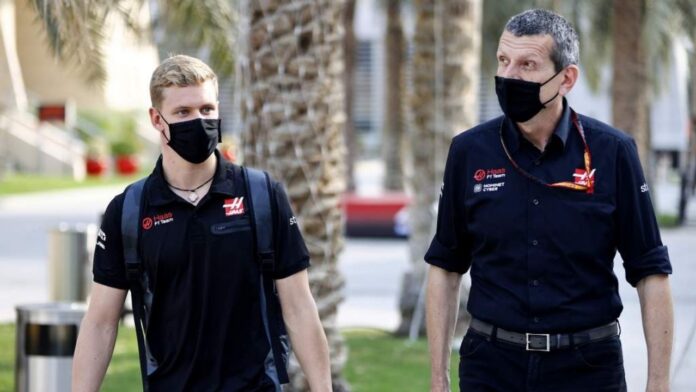 Haas driver Mick Schumacher is a member of the prestigious Ferrari Drivers Academy and is expected to drive for the Scuderia in the future.

He is looking forward to following his father, Michael Schumacher‘s footsteps.

But for now, Mick is set driving for Haas. In the event he decides to leave Haas, Team Principal, Guenther Steiner knows what he will do.

The Austrian boss, however, will still have a driver associated with Ferrari in his team if Schumacher decides to move on from Haas in 2022.

However, Steiner hopes that Mick continues with his team for the next season as well.

The German rookie was the winner of the F2 championship last year and this season is his debut in F1 with Haas. Even though just half a season has passed, there already are talks of him moving on.

However, Steiner wants the 22-year-old to stick with the team for the next season.

In The Race, Steiner said, “I’m as confident as I can be that Mick will be with us next year. Mick is contracted to Ferrari, and we will be having a Ferrari driver. If it’s not Mick, fine, they have a few other good ones.

“It would be ideal if Mick stays on and I’m pretty sure that that is what will happen,” the Haas boss concluded.

Who does Steiner have if Mick leaves?

If the German driver decides to leave Haas, Guenther has a few options from the F2 championship.

Callum Illot, Robert Shwartzman, and Marcus Armstrong are among the top candidates who could possibly get a seat with the Steiner-led team.

Illott is the official test driver for Ferrari and therefore might find a debut through Haas.

On the other hand, the Ferrari junior drivers, Shwartzman and Armstrong are driving in F2.

The Russian stands in third with 91 points to his name, while Armstrong is in fourteenth place with just 24 points.

Regardless, both drivers have the potential to drive alongside Nikita Mazepin next season.

What are your predictions for Haas? Let us know in the comments below!