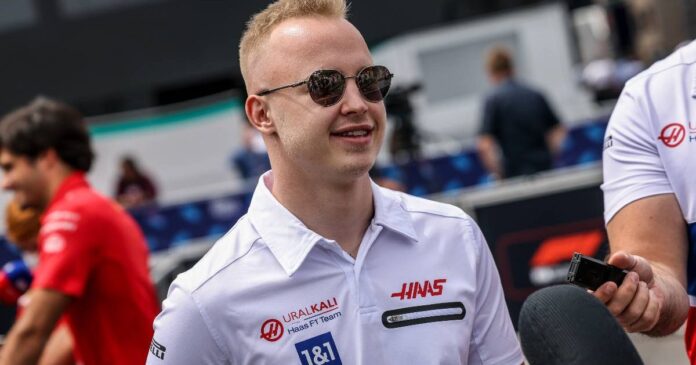 Guenther Steiner recently gave Nikita Mazepin a spinner toy jokingly as a present to mark his on-track driving that usually ends in spins.

Mazepin has been the butt of many jokes ever since he started out in Formula 1.

There is so much hate for the young Russian driver that there is a website that tracks his spins in every race of the current season.

At the Styrian Grand Prix, Steiner gave Mazepin a ‘gift’ and published the entire video for their social media channels.

“There is a little present for you so you can keep on Mazespinning… So now you spin this one, it’s better than spinning the car!” Steiner is heard saying.

Later, the Haas team boss was asked by reporters to explain the gift.

What did Steiner say?

“I think he got used to social media storms!” he began.

“He was on the wrong side at some stages, and in the end, social media can be good or bad to you. It was an idea in the team to do this to him and then we did it.

“It was decided to be a little bit funny. We can also be funny here – everything on social media about Nikita is about bad things so there can also be good things, try to use it to your advantage and get away from the naysayers.

“He was not uncomfortable, he was pretty happy. You know there is a happy Nikita Mazepin as well. He’s not this unhappy kid you all think he is, this miserable young man, he’s got a good sense of humor,” Steiner insisted.

On receiving the present, Mazepin was at first unable to understand but broke into a laugh soon after thanks to his sense of humor.

While due to his social media antics, the Haas driver has been branded F1’s most hated.

Irrespective of that, his father is responsible for financing the beleaguered American team so that they can survive.

Will Nikita improve his performance in the future? Only time will tell.

Read More: Carlos Sainz was forced to unlap himself from Lewis Hamilton in Austria – “It was a very strange scenario”