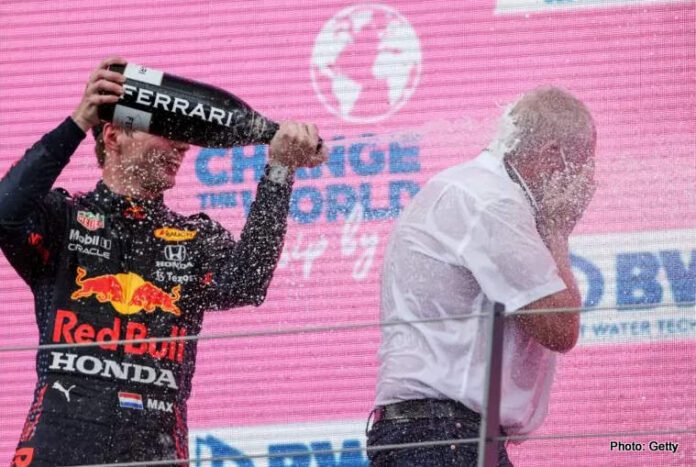 Helmut Marko was given the chance to share the podium with the race winners including Max Verstappen at the Styrian Grand Prix.

The 78-year-old, however, joked that he would prefer if someone else would take his place next time.

This was after he was sprayed with champagne on the podium.

Marko hopes to keep going on with the wins in the upcoming races.

In an interview, Marko was confronted with the fact that he was covered in champagne.

“Yeah but I have to say, on the podium, I didn’t really have a chance,” he laughed.

“The drivers were spraying, I couldn’t really see anything so it all came over me but it’s a nice thing,” he said.

Red Bull for win next week

The man from Graz was pleased with the result and hopes for a similar outcome in the race next week.

“But then not with me on the podium,” he joked.

“We controlled the whole race and Max was not forced to go to the limit, we had the tyre degradation better than Mercedes.

“Next weekend we have softer tyres, so I hope they will suit us better.”

Missed out on double podium

Red Bull missed out on scoring a double podium as Sergio Perez was half a second late in the fight.

“I have to say that if our pit stop had been at normal speed, we would have been first and third, the maximum,” Marko continued.

“But we are really happy and we thank our boss [Dietrich Mateschitz] who made all this possible.

“He owns this circuit, he gives us the means to run two Formula One teams and now we have a Dutch driver who flies, not drives, he flies,” he concluded.

We can only wait and see how Red Bull performs at the next weekend’s race.