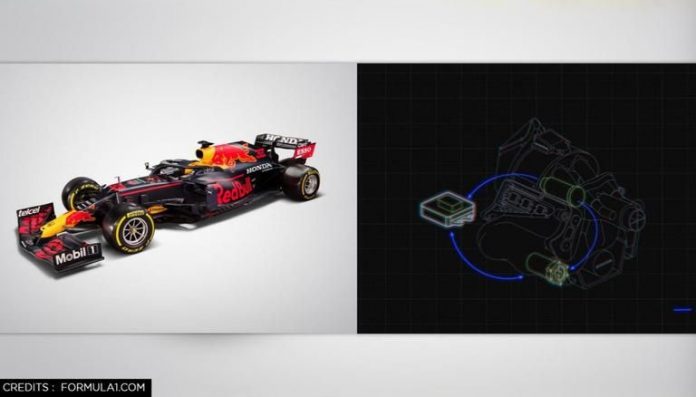 Honda has brought forward their 2022 engine by a year for their final season in Formula One, in the hopes of helping Red Bull win their first championship title since 2013.

The energy store, which will be installed on the Red Bull and AlphaTauri vehicles in Belgium, is the “last big improvement” of their 2021 power unit before they retire from Grand Prix racing at the end of the year, they claimed.

Many in the F1 paddock consider Honda’s 2021 engine, the so-called RA621H, to be the strongest PU in the current field, with Pierre Gasly’s qualifying form for AlphaTauri supporting Red Bull Racing’s pace.

A major package of system upgrades had been postponed until 2022, but with the Japanese company’s decision to discontinue its official engagement in the sport early, it was decided to move through with the new project this year.

Red Bull’s Formula One car is powered by Honda, and the team has revealed a huge change that has gone unnoticed as they try to catch Mercedes in the constructors’ standings.

In the Formula One constructors’ standings, Red Bull is now 18 points behind Mercedes. Red Bull’s F1 car is now powered by Honda, and the company has revealed a significant change that has gone unnoticed. For the Belgian Grand Prix, they adopted a new energy reserve as they continue to go all out to beat Mercedes to the championship in what will be their final year in Formula One.

“The original plan was to implement this new structure PU this year in 2021,” said head of power unit development Yasuaki Asaki.

“But then for a variety of reasons, it was decided not to proceed with a brand new PU. However, the thinking on this really changed when Honda announced that we would be leaving the sport.”

“I went to President Hachigo, and said to him that we would really like to implement this new structure PU for our last year in the sport. And he kindly accepted that request.”

Asaki emphasized, the alterations to the new PU’s layout were so extensive that a significant amount of effort was required.

“That was never going to be an easy task, given the scope of the changes being made to the power unit’s architecture,” he said.

“First of all we’ve changed the camshaft layout to be much more compact, and also brought its position lower down so it’s closer to the ground.

“We’ve also had to make the head cover lower and more compact, which means that the way that air flows over it has become a lot better, and we’ve also lowered the centre of gravity of the ICE.

“Another thing we changed is the bore pitch, by reducing the distance between one bore and the next, we’ve made the engine itself shorter, smaller.

Honda reviews a major update to its engine

Since the Formula One summer break, Honda has been employing an updated battery that has resulted in improved engine and car performance.

For 2021, the Japanese manufacturer redesigned its engine and began the season with a significantly improved internal combustion engine.

Honda, on the other hand, began the year with the 2020-spec battery, dubbed the “energy storage” in F1. It was allowed to upgrade that component during the season because it had not changed its specifications during the allotted period.

Ferrari is considering a similar improvement to its energy recovery system, which will most likely include the battery. Honda’s enhanced component has remained a secret until now, despite being utilised by Max Verstappen to win races in Belgium and the Netherlands.

Sergio Perez of Red Bull underwent a set of engine component alterations following qualifying at Zandvoort, which was the first hint of its presence.

However, after a disappointing qualifying performance at Zandvoort, Red Bull and Honda decided to replace all of his engine components, a strategic decision to get the related grid penalty out of the way at a lesser cost, that included switching from the old-spec batteries to the new one.

As a result, Perez had to start from the pitlane, because parts can only be changed without penalty in parc ferme conditions if they are of the same specification. One week later, at Monza, the same thing happened to AlphaTauri driver Pierre Gasly.

Honda’s new battery took years to create, and it’s the company’s first substantial technological advancement in this field since 2015. It is believed to provide increased power unit performance as well as a “substantial” weight reduction, which aids chassis performance by allowing for better weight reduction.

The battery was supposed to debut in 2022 as part of a whole new Honda powertrain.

However, because Honda is departing Formula One at the end of the season, that new power unit was rushed through and developed for 2021. It took longer to prepare the battery component of that power unit, so it wasn’t used until after the summer break.

Red Bull relies on their new engine for the championship title

Sebastian Vettel successfully defended his World Championship in the fourth to last race of the year, winning his fourth title in a row. He became only the third driver in Formula One’s sixty-four-year history to win four World Drivers’ Championships in a row.

Vettel won by a record 155 points, making it one of the sport’s most dominant championship victories. Vettel was also named Sportsman of the Year by the Laureus World Sports Awards for his 2013 season performance, making him only the second racing driver to receive the honour

Vettel’s team Red Bull Racing successfully defended their World Constructors’ Championship in the same race as their lead driver secured his title, with the help of teammate Mark Webber.

Honda’s current exit from Formula One is comparable to when they shut down their works team operation at the end of 2008 in that it is not a difficult transition. Last time, the Japanese manufacturers worked out a deal in which Ross Brawn bought the team and Honda continued to fund it for a year.

Honda has agreed to let Red Bull use their technology for the next three years, until the next generation of power units is released in 2025. Red Bull will manage the project through a business called Red Bull Powertrains Ltd, which will be based on their Milton Keynes site.

Red Bull does not want to be a customer team because they feel that in order to win the World Championship, you need a works engine.

Returning to Renault power – who, as the French manufacturer with the fewest customers, would have been obligated to supply Red Bull and AlphaTauri with units in accordance with the regulations – was not a desirable alternative, given how tumultuously their partnership ended in 2018.

According to team president Christian Horner, Red Bull expects Mercedes to use a new power unit and face a penalty as a result. Lewis Hamilton has already utilized three of his three allowed power units for the 2021 season, although he may choose to accept a penalty in order to replace the engine a fourth time.

With seven races left in the season and Hamilton only two points ahead of Max Verstappen in the standings, Horner believes Mercedes is holding off on making a choice.