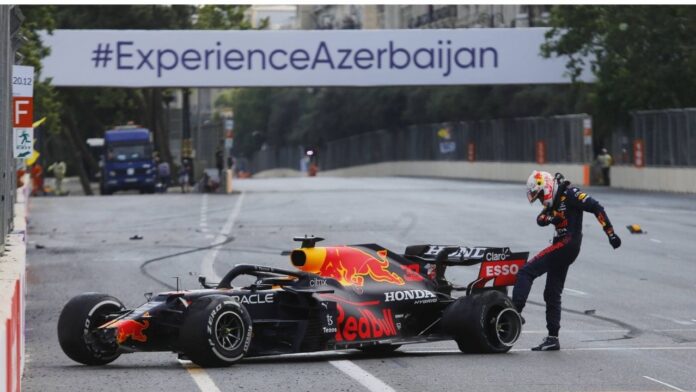 Max Verstappen had tough luck during the Azerbaijan Grand Prix where he fell victim to a tyre explosion that ended his race with just a few laps left.

Coincidentally, the highlight of the race were the exploding Pirelli tyres, which apart from Verstappen, was faced even by Lance Stroll.

Just after Verstappen’s crash, Red Bull took to the radio to broadcast a message to the FIA claiming that they had no warning about the tyres.

The Dutchman went on to declare the situation as ‘life-threatening’ and the cause of the tyre explosion was pinned on debris.

Investigations reveal the cause

Pirelli, after the race, conducted various investigations and the hard compound tyres of many teams.

While the final results are awaited, early reports claim that the blowouts were not due to any debris but rather due to not running the tyre with appropriate pressure.

Cars running with a lower tyre pressure are often faster and have more grip.

For the weekend in Azerbaijan, Pirelli had increased the minimum pressure of the rear tyres from 19 to 20 psi.

The FIA takes a note of the tyre pressure of each car before they hit the tracks. Additionally, they also have access to data generated from sensors attached to the cars.

There are rumours that several teams are able to find loopholes for the rear tyre pressure.

However, there is no proof yet that Red Bull and Aston Martin manipulated the tyre pressure.

In order to avoid any form of hampering, the FIA, F1, and Pirelli will be using the same tyre pressure sensor starting from 2022.

One thing is certain, both the FIA and Pirelli do not want a repeat of this incident.

Back in 2013, at least 4-5 cars had to endure high-speed punctures at Silverstone which raised eyebrows on the safety of the drivers.

Read More: New statistics place Max Verstappen ahead of Lewis Hamilton in the fight for title

Helmut Marko ecstatic after Styrian Grand Prix win – “We have...

Why have Lance Stroll memes taken over the internet? It has...