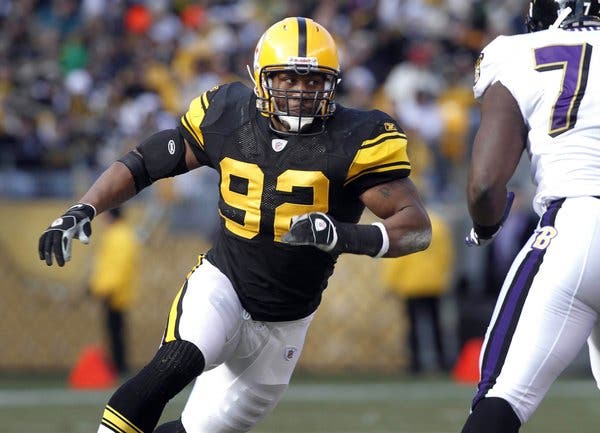 James Henry Harrison Jr., a former American football linebacker, was born on May 4, 1978. He attended Kent State University and was signed as an undrafted free agent by the Pittsburgh Steelers in 2002.

Harrison was a five-time Pro Bowler who won two Super Bowls with the Steelers: XL and XLIII. He was the lone undrafted player to win the Associated Press NFL Defensive Player of the Year award in 2008. During games, Harrison was noted for his hard-hitting approach.

Harrison also spent time with the Baltimore Ravens and Cincinnati Bengals, as well as NFL Europe’s Rhein Fire. He announced his retirement from the NFL after the 2013 season, but he came out of retirement to re-join the Steelers and played the part of his last NFL season with the New England Patriots.

James Harrison is an American professional football linebacker. ‘Silverback,’ as he is called, is his nickname. He was always interested in American football and track and field sports, even as a kid. He played collegiate football for Kent State University.

In 2010, he was inducted into the Varsity ‘K’ Hall of Fame at Kent State. He gave a $100,000 grant to the university, and the field house was named after him. Despite his strong collegiate career, he went undrafted in the NFL draft in 2002.

In 2002, the Steelers signed him as an undrafted rookie. He spent around two years with the practice squad, on and off and was dismissed a couple of times. In 2003, Harrison signed with the Baltimore Ravens and was later assigned to the Rhein Fire of the NFL Europe. During this time, though, he was released by the Ravens. He had decided to retire after being cut for the fourth time.

But, soon after, the Steelers signed him for the fourth time, and he made significant progress, making the final roster. He had a strong season in 2005-06, and his team went on to win Super Bowl XI. In 2009, his contract with the Steelers was extended for another six years for $51.75 million.

In 2013, he signed with the Cincinnati Bengals but was released after a year. In August 2014, he declared his retirement, but in September of the same year, he returned to the Pittsburgh Steelers. In 2016, he became the Steelers’ all-time sack leader. He joined the New England Patriots in late 2017 and announced his retirement in April 2018.

Harrison was the youngest of 14 children born to James Sr. (a chemical truck driver) and Mildred in Akron, Ohio. He was a member of the Sloan Little League’s Green Team in Scranton, Pennsylvania. In 1991, he was named to the All-Star squad.

He was born and raised in Akron, Ohio, and his favourite NFL team was the Cleveland Browns, who played about 40 miles from his home. At first, his mother was adamant that he not plays. It took both Harrison and his boyhood best friend, David Walker, to persuade her. He was a standout linebacker and running back when he first started playing.

He split his freshman year between Archbishop Hoban High School and Coventry High School, where he competed in track and field events ranging from the short throw to the high jump, in addition to football. Harrison and Jonathan Holloman were two of Coventry’s first African-American football players. Harrison received his diploma in 1998.

His high school football ability was outstanding, but he struggled with his lack of maturity at times. Harrison ignored his schoolwork and failed his college entrance exams, and by his senior year, he had become a disruptive member of his football team. Coventry had to suspend him for two games early in his senior year when he challenged an assistant coach to a fight.

Following his return from suspension, he started his next game by carrying three times for nearly 100 yards and two scores. He was dismissed and later suspended for one game after running down the opposing team’s sideline after scoring his second touchdown.

Soon after, Harrison was in court for shooting a BB gun at a defensive coach in the school locker room. He was permitted to return to school to finish his senior year after pleading guilty to a minor crime. Powerhouse football colleges like Ohio State, Notre Dame, and Nebraska retracted their scholarship offers due to his off-the-field concerns.

Harrison was a walk-on for the Kent State Golden Flashes football team while at Kent State. Harrison became a starter for the final three games of the 1999 season after sitting out his freshman season due to NCAA academic rules. He led the team with 106 total tackles and 13 tackles for a loss. He also had three fumble recoveries and an interception.

On August 30, 2014, Harrison announced his retirement, and on September 5, 2014, he formally retired as a member of the Pittsburgh Steelers. On September 23, 2014, reports circulated that Harrison was set to return to the NFL after Mike Tomlin stated in a news conference that members of the Steelers defence had sustained major injuries. Harrison will return to the Steelers, according to a tweet on the Steelers’ Twitter page.

He signed a one-year contract with the New England Patriots on December 26, 2017. Harrison had two sacks, a forced fumble, and five total tackles in his NFL debut against the New York Jets. He and the Patriots made it to Super Bowl LII but were defeated by the Philadelphia Eagles 41–33.

Harrison announced his second retirement from the NFL after 15 seasons on April 16, 2018, in an Instagram post saying, “I’ve missed way too much for way too long…I’m done”.

James Harrison contribution to the team

The Patriots were in desperate need of a player like Harrison, whose strength at the line of scrimmage has helped them establish a strong running game edge. Harrison has also been able to pressure the passer while dropping into coverage.

So far, Harrison has played 57 of 126 defensive snaps in two games since joining the team (45.2 per cent). He has eight tackles and two sacks on the season.

“He’s been good to work with,” Patriots coach Bill Belichick said. “As we know, he’s a very experienced player. Some of our terminologies are different, but he understands basic football concepts very well, and what his responsibility is, and how to play that responsibility.

“He’s been good. He’s been very dependable. The things he’s been asked to do, he’s done. You can count on him, and that’s a good thing. It allows everybody to play aggressively. He’s an aggressive player and he’s been productive.”

Harrison had many solid plays against the run in the win over the Titans, according to Belichick, and caused a penalty. “He’s given us some plays in pass rush,” he added, “and he has terrific awareness in pass coverage; he’s dropped into coverage and done a good job there.”

“He’s very professional. He wants to do well. He studies. He asks questions. I’ve enjoyed working with him.”

James Harrison net worth in 2021

Cristiano Ronaldo says he is ready to start against Newcastle

Jose Mourinho net worth: How much is the former Real Madrid,...