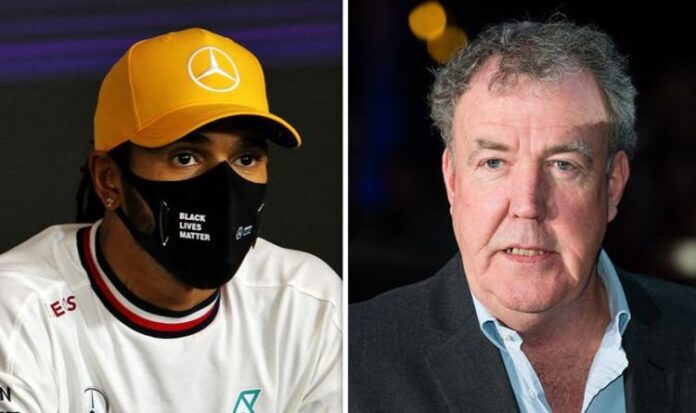 Automotive presenter Jeremy Clarkson took a Twitter dig at Lewis Hamilton during the events of the Hungarian GP restart.

The Hungarian GP was nothing short of a mess, with collisions and crashes coming hard and fast, and a surprise winner at the end. Four drivers retired in the opening lap itself. Unsurprisingly, the race was red-flagged.

Minutes before the restart, every driver on the grid pitted, except the reigning champion, Lewis Hamilton. The Brit hoped that his head-start would be enough to bank on when he would pit.

So at the restart when the lights went out, it was only Hamilton on the grid. This was discussed by many, and it was a general source of light fun. When this was happening, Clarkson joined the party.

Clarkson took to Twitter to give his thoughts on the situation. He tweeted, “Ah. Clever. Only Hamilton on the track. That way he can’t hit anybody.”

Clarkson was obviously speaking about the British GP, where Hamilton and title rival Max Verstappen collided. The statement was a direct reference to many people blaming Hamilton for the incident. There was crashes galore in Budapest, and at the heart of it was Valtteri Bottas.

The other Mercedes driver might just become the next target of Clarkson’s Twitter games. His crash into the back of Lando Norris’ car set off a chain reaction of collisions and spins that saw many drivers retire. Among them was Sergio Perez, the other Red Bull, meaning it was a shambolic day for the Milton Keynes outfit.

Clarkson was at least half right, because Hamilton didn’t collide with anyone. In fact, after his failed strategy, he battled back to secure P3. He treated the fans to some very interesting encounters, including a stretched-out legendary duel with Fernando Alonso.

The Hungarian GP wasn’t a race for the usual suspects, but Hamilton made the most of the situation. As it stands, he is P1 in the WDC race, and will look to hold on with title rival Verstappen right behind him.

Daniel Ricciardo: Why is he such a fan favourite despite never...

Lewis Hamilton still has the option to ‘escape’ from his contract...