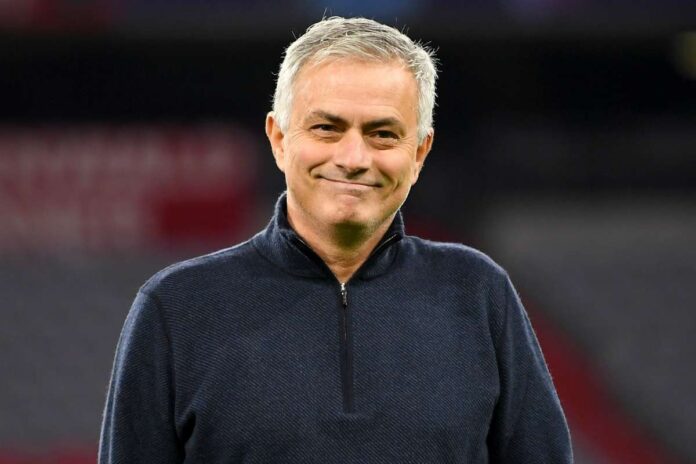 José Mourinho is the current head coach of Serie A club Roma. He is a former player and professional football manager from Portugal. He is widely regarded as one of the greatest managers of all time, as well as one of the most decorated managers in history.

José Mário dos Santos Mourinho Félix was born in 1963 in Setbal, Portugal, to a large middle-class family. He was the son of José Manuel Mourinho Félix, also known as Félix Mourinho, and wife Maria Jlia Carrajola dos Santos. His father played professional football for Os Belenenses and Vitória de Setbal, earning one cap for Portugal along the way.

Mourinho wanted to emulate his father and joined the Belenenses youth team. As a senior, he played for Rio Ave (where his father was the coach), Belenenses, and Sesimbra. He lacked the necessary speed and power to make it as a professional football player and instead chose to pursue a career as a football coach.

Former Scotland manager Andy Roxburgh noticed the young Portuguese’s drive and attention to detail while attending coaching courses run by the English and Scottish Football Associations. Mourinho attempted to redefine the role of a coach in football by combining coaching theory with motivational and psychological techniques.

After an unremarkable career as a midfielder in the Portuguese leagues, Mourinho moved into coaching, first as an interpreter for Sir Bobby Robson at Sporting CP and Porto, then as an assistant at Barcelona under both Robson and his successor, Louis van Gaal.

Mourinho returned to Porto as a manager in 2002 after brief stints at Benfica and Unio de Leiria, winning the Primeira Liga twice, a Taça de Portugal, the UEFA Cup, and the UEFA Champions League and, Porto’s first European Cup title since 1987.

That success earned him a move to England in 2004, where he won two Premier League titles, an FA Cup, and two League Cups in three seasons before leaving in 2007 amid reports of disagreements with club owner Roman Abramovich.

Mourinho joined Inter Milan in 2008, where he won Serie A twice, as well as a European treble of Serie A, Coppa Italia, and the UEFA Champions League in 2010, a first for an Italian club. This made him one of only five coaches to have won the European Cup with two clubs, and it also earned him the first FIFA World Coach of the Year award later that year.

Mourinho then moved to Real Madrid, where he won La Liga with a record points total in 2011–12, becoming the fifth coach in history to do so. In addition, he won the Copa del Rey and the Supercopa de Espaa.

Mourinho left Real Madrid in 2013 to return to Chelsea, where he won another league title and the League Cup before being fired in 2015 due to a poor run of results. Mourinho was appointed manager of Manchester United in 2016, and in his first season, he won the UEFA Europa League, League Cup, and FA Community Shield.

He took over as manager of Tottenham Hotspur in 2019 and was fired in 2021, the first time he left a club without winning a trophy since 2002. Roma quickly hired him.

In 2015, the Portuguese Football Federation (FPF) named him Portuguese Coach of the Century, and he was the first coach to spend more than £1 billion on transfers.

Mourinho met his wife Matilde “Tami” Faria, while he was a teenager in Setbal, Portugal, and they married in 1989. Matilde, their first child, was born in 1996, and José Mário Jr, their first son, was born four years later.

He was named the New Statesman Man of the Year in 2005, and he was described as a man who was dedicated to both his family and his work.

Mourinho was awarded a doctorate honoris causa degree by the Technical University of Lisbon on March 23, 2009, for his achievements in football. The Spanish Rolling Stone magazine named him “Rockstar of the Year” in December 2011. Mourinho also worked as an analyst for RT during the 2018 FIFA World Cup.

Mourinho began hosting a show called On the Touchline with José Mourinho on the RT network in 2019 to cover the 2019 UEFA Champions League. Mourinho joined UK broadcaster Sky Sports as a pundit on their Premier League coverage in August 2019.

Mourinho has been involved in social initiatives and charity work, such as assisting with a youth project, bringing Israeli and Palestinian children together through football, and donating his “lucky” jacket to Tsunami Relief, which earned the charity £22,000. He has served as a Global Ambassador for the United Nations World Food Programme since his appointment in 2014.

During his first season at Chelsea, Mourinho was fined € 8900 for falsely accusing the referee of plotting a conspiracy against his team with Frank Rijkaard.

He was widely chastised for making such remarks during the post-match presentation. Mourinho was also given a two-game touchline ban.

The most memorable moment of his three-year stay in Madrid was undoubtedly his “one-on-one” with Tito Vilanova.

The incident occurred as both teams emerged from the tunnel prior to the start of a crucial Clasico game. Mourinho poked Vilanova in the eye with his finger.

This was a frantic start to an already tense game. Several red cards were issued during the game, resulting in a 3-2 victory for the Blaugranas.

One of the most serious, yet hilarious, Mourinho controversies involved him sneaking into the Barcelona dressing room while hiding inside a laundry basket.

Barcelona ultimately lost the game. This was a serious violation of the code of conduct on his part.

Read more: Pep Guardiola net worth: How much is the top coach earning and what is he worth in 2021?