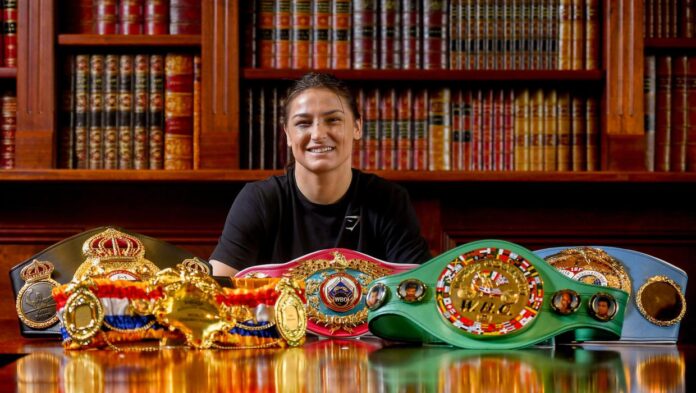 Katie Taylor is one of the biggest names when it comes to women’s boxing. She is also an undisputed lightweight champion is also a member of an elite club of pugilists.

‘The Bray Bomber’ is among seven other professionals who have held world titles of all four sanctioning bodies at the same time.

What is interesting is that boxing is not even the primary sport of the 34-year-old.

She began her sporting career playing soccer and was even a part of the Republic of Ireland team. Her career lasted for 19 matches and she scored two goals through it.

Katie Taylor was into boxing as an amateur while she played soccer professionally. However, she decided to pursue boxing full time.

Taylor won gold medals at five consecutive world championships as an amateur. She also managed to score a podium at six European Championships.

by 2012, KT won the inaugural Olympic gold medal in the women’s lightweight category. After just four fights into her professional career, she won a belt.

Additionally, she managed to add the IBF, WBO, WBC, and The Ring titles to her stack and became a part of an elite group to hold four titles at once.

KT then moved on to junior welterweight, overpowered Christina Linardatou, and won the WBO belt in the category. Then in 2020, she beat Miriam Gutierrez and raised her record to 17-0.

She is currently in talks for a crossover fight.

According to Sportekz, Katie Taylor is worth £1.25 million ($1.6 million) in 2021. As claimed by the Belfast Telegraph, Taylor earned a massive $1 million sum through her second fight with Delfine Persoon.

Apart from her own businesses, she has tie-ups with the likes of Honda and Windsor Motor Group.

Katie Taylor is also involved in charity work. For instance, she is the brand ambassador for the Children’s Health Foundation on Temple Street.

She also became a part of the Make-A-Wish Foundation’s enterprise. According to this initiative, a child would get the chance to see Katie box and attempt to win a world title.

Read More: Dillian Whyte net worth: How much does professional boxer make through salary and deals?

“Should never have done anything”: Joe Rogan on his failed hair...

Khabib, Rousey and 3 other UFC fighters who chose to retire...