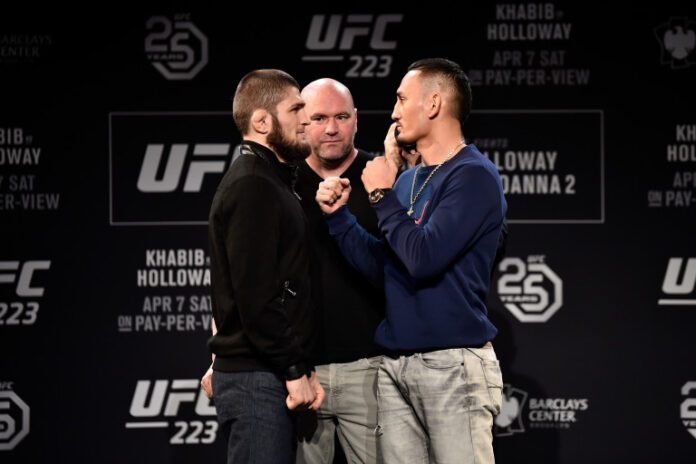 It was revealed that Max Holloway stepped in to meet Khabib Nurmagomedov at UFC 223 on six days’ notice. The news came after Nurmagomedov’s initial opponent, Tony ‘El Cucuy’ Ferguson, had to withdraw due to a knee injury, resulting in the match’s fourth cancellation.

The UFC lightweight belt was on the line for the bout, as it had been removed from then-champion Conor McGregor due to inactivity.

Unfortunately, the fight did not take place because the New York State Athletic Commission judged Holloway medically unfit for the fight.

Later, NYSAC issued an official statement on the topic, “With much regret, and after careful review, a joint decision was made between the state athletic commission and the UFC. We’ve deemed Mr. Holloway medically unfit to attend the scales (to weigh in). No further comments at this time. We apologize,” Kim Sumbler, the executive director of the NYSAC, told reporters at the official weigh-ins.

Despite the fact that the fight between Nurmagomedov and Holloway did not take place, it is largely recognised by MMA fans as one of the best-booked UFC fights of all time.

Following the cancellation, Nurmagomedov and White praised Holloway for stepping in and taking the fight on such short notice.

The main event of UFC 223 suffered a setback after two fighters withdrew. The UFC attempted to book Anthony Pettis as Khabib Nurmagomedov’s opponent. However, Pettis did not weigh in again after missing the title weight by 2 pounds the first time.

The fight was offered to Paul Felder, but NYSAC declined because ‘The Irish Dragon’ was unranked at the time. The fight was eventually went to Paul Felder’s opponent Al Iaquinta, but he was ruled ineligible to become champion because he weighed 0.2 pounds over the 155-pound limit.

Khabib Nurmagomedov aiming for an Oscar for his documentary -“Cooperating with...