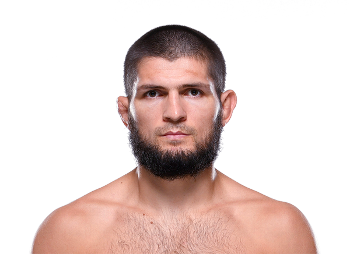 Khabib Nurmagomedov is a retired professional mixed martial artist and MMA promoter from Russia. He was most famous for competing in the Ultimate Fighting Championship (UFC) lightweight division, where he was the longest-reigning UFC Lightweight Champion, holding the title from April 2018 to March 2021.

On September 20, 1988, Khabib Abdulmanapovich Nurmagomedov was born to an Avar family in the village of Sildi in the Tsumadinsky District of the Dagestan ASSR, an autonomous republic within the Russian SFSR, Soviet Union.

He began wrestling under the tutelage of his father, Abdulmanap Nurmagomedov. Abdulmanap, a decorated athlete and veteran of the Soviet Army, had wrestled since he was a child before receiving military training in judo and sambo. Abdulmanap dedicated his life to coaching the youth of Dagestan in the hopes of providing an alternative to the region’s prevalent Islamic extremism.

His family relocated to Makhachkala, Dagestan’s capital, in 2001, where he began wrestling at the age of 12 and judo at the age of 15. At the age of 17, he resumed combat sambo training with his father. In his youth, Nurmagomedov was frequently involved in street fights before focusing on mixed martial arts.

Nurmagomedov is a two-time Combat Sambo World Champion with a background in sambo, judo, and wrestling. His grappling style has made him one of the most dominant athletes in MMA history.

At the time of his retirement, Nurmagomedov was ranked first in the UFC’s men’s pound-for-pound rankings, and he remained there until his title vacation in March 2021.

Nurmagomedov is the first Muslim fighter to win a UFC championship. With over 29 million followers as of June 2021, he is the most-followed Russian on Instagram.

Nurmagomedov made his professional MMA debut in September 2008, winning four fights in less than a month. He won the inaugural Atrium Cup tournament on October 11th, defeating his three opponents at the Moscow event. He went undefeated over the next three years, defeating 11 of his 12 opponents.

In late 2011, Nurmagomedov agreed to a six-fight contract with the UFC to compete in the lightweight division. On January 20, 2012, at UFC on FX 1, Nurmagomedov defeated Kamal Shalorus via submission in the third round in his UFC debut.

Ferguson was scheduled to fight for the fourth time at UFC 223 on April 7, 2018. Ferguson, however, was reported to have injured his knee and would be replaced by Max Holloway on April 1, 2018.

Holloway was removed from the fight on April 6 after the New York State Athletic Commission ruled him unfit to compete due to extreme weight loss, and was replaced by Al Iaquinta. Nurmagomedov won the fight by unanimous decision to become the UFC Lightweight Champion.

On Friday, August 3, 2018, the UFC announced that Nurmagomedov would defend his lightweight title for the first time against Conor McGregor at UFC 229 on October 6 in Las Vegas.

Nurmagomedov won the first two rounds of the fight before succumbing to McGregor in the third. Nurmagomedov had never lost a round in his UFC career. He was able to defeat McGregor via submission in the fourth round.

Nurmagomedov signed a new multi-fight contract with the UFC in June 2019. On September 7, 2019, in the main event of UFC 242, Nurmagomedov made the second defence of his title against interim lightweight champion Dustin Poirier in the first fight of his new contract. He won the fight in the third round with a rear-naked choke submission.

Nurmagomedov faced Gaethje in a unification fight in the main event of UFC 254 on October 24, 2020. Nurmagomedov won the fight via technical submission in the second round with a triangle choke to defend and re-unify the UFC Lightweight Championship. Nurmagomedov announced his retirement from MMA in his post-fight interview.

He explained that he had promised his mother that he would not fight in the absence of his late father. He said,  “No way I’m going to come here without my father. It was first time after what happened with my father, when UFC called me about Justin, I talk with my mother three days. She doesn’t want me to go fight without my father but I promised her it was going to be my last fight. If I give my word, I have to follow this. It was my last fight here.”

This victory earned him the award for Performance of the Night. After the fight, Daniel Cormier claimed on an episode of DC & Helwani that Khabib said he chose the triangle choke over an arm bar to protect Gaethje from injury.

Abdulmanap Nurmagomedov, Nurmagomedov’s father and long-time trainer, was placed in a medically induced coma in May 2020 after contracting COVID-19 following heart surgery. He died on July 3, 2020, at the age of 57, in a clinic in Moscow.

Ramzan Kadyrov made Nurmagomedov a “Honorary Citizen of Grozny” after his victory over McGregor at UFC 229 in October 2018, and he was also given a Mercedes car.