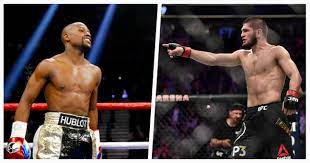 Khabib Nurmagomedov, the former UFC lightweight champion, has given details about his prospective battle with boxing icon Floyd Mayweather Jr.

Nurmagomedov said, “The enticement is always there. There were such discussions with Saudi Arabia. They wanted me to fight there. I don’t know about $100 million. That wasn’t the exact sum, but about that…”

Given this, the offer made to Nurmagomedov was most likely an exhibition boxing battle against Mayweather.

In an interview with Mike Tyson, Abdelaziz stated, “Khabib got offered $100 million after he was retired to fight Floyd Mayweather. $100 million. You can ask Floyd, you can ask everybody, and Khabib said ‘no, I’m retired, I told my mother I’m retired, I’m gonna keep my word to my mother. If my mother told me to fight again maybe I will but right now, she told me not to fight’.

“He comes from a Muslim culture, we respect our mothers very dearly, we can’t go to heaven without our mother’s permission.”

Nurmagomedov announced his retirement from mixed martial arts in October 2020. After his retirement, he stated that he would not fight in any professional combat sports competition again.

“Meanwhile, Mayweather, who retired from professional boxing in August 2017, will compete in an exhibition boxing battle on June 6th, 2021, against YouTube megastar Logan Paul.

Read more: Floyd Mayweather net worth: One of the richest boxers to have ever graced MMA

“He always gets knocked out and beaten”: Covington brands former teammate...

‘Mini Khabib’ makes the internet erupt in laughter yet again after...