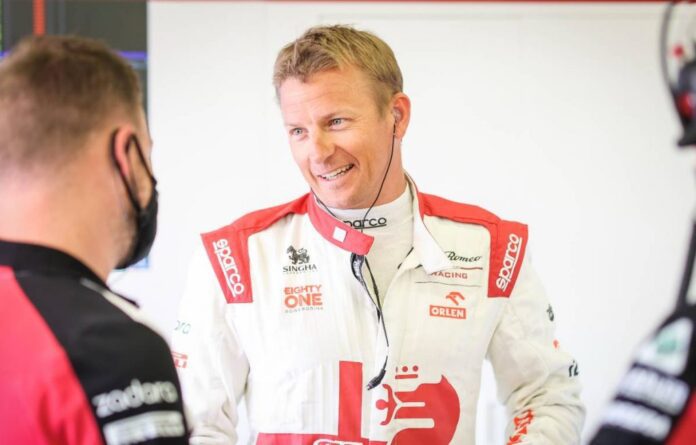 Alfa Romeo driver Kimi Raikkonen recently talked about his future in the sport and opened up about his experience, age, and progeny.

While the old-timer is still unsure about the upcoming season, he also talked about being a member of the elite 20 on the grid and having the opportunity of racing with great drivers.

He also talked about his son along with the children of other drivers.

Additionally, he also expressed his opinion on the rumors that Mick Schumacher could take his seat at Alfa Romeo.

Raikkonen, however, was cryptic about his future in Formula 1.

He is currently the most experienced driver on the grid having 342 races to his name.

What did Kimi say?

With the massive number of races to his name, Raikkonen stated that he is not too bothered.

“I’m not interested in expanding my record,” he said.

“All records are broken at some point. That’s why that doesn’t give me anything.”

When asked what he thinks about Schumacher taking his seat, he gave a straightforward answer.

“If I decide to quit, I really don’t care who drives the car. That is no longer my problem,” he stated.

“It’s difficult for him to shine because the car isn’t really fast. On the other hand, that’s good for him too.

“Because people know the car is not good. If he still drives strong races and shows his speed, that’s positive.”

”He’s under a lot of pressure, of course, with the name. The worse car gives him an easier start because expectations are low. It gives him more time to learn things,” he mentioned.

Kimi talks about his children

Kimi Raikkonen has had the opportunity to race alongside some big names including Jos Verstappen and Michael Schumacher.

Both these drivers have created an opportunity for their children to enter the sport.

Raikkonen was asked if he would let his children join Formula 1 in the future.

“I will definitely promote anything they have fun on. No matter what it is. But I won’t force anything,” he stated.

Kimi also talked about his son having a keen interest in karting.

“He drives go-karting fervently and loves everything that has an engine,” he explained.

“Sometimes he does his laps for a whole afternoon, sometimes less because he feels like doing something else. The same also applies to my younger daughter, who is also slowly starting to be interested in everything that moves,” he concluded.

We can only wait and see if Kimi will continue another season in Formula 1.

“I have no sympathy for Ricciardo”: Norris says teammate needs to...