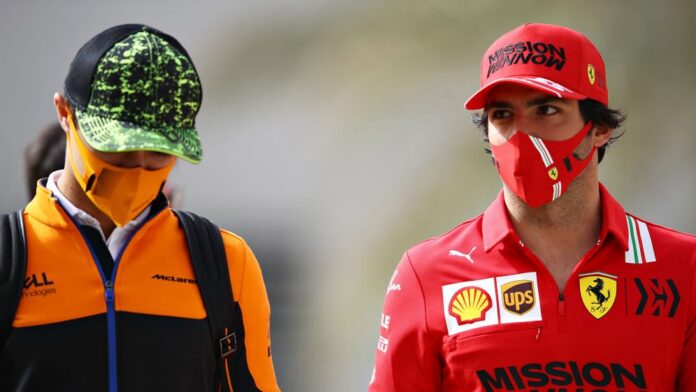 Lando Norris has revealed that he has spent time with Carlos Sainz playing golf. This has improved their on-track partnership.

Both Sainz and Norris had joined McLaren back in 2019. As a result, the duo developed a strong bond both on and off track.

However, when Daniel Ricciardo joined the outfit replacing Sainz, it was expected that the Australian and Norris would develop a similar bond.

But the kind of relationship that was expected had failed to materialize.

“We still get on well and we have a good laugh and we’re still good mates and everything,” said Norris about Ricciardo.

“One simple thing is our interests away from the circuit are really different. He’s more into his making wines and in clothing and things and I’m more into golf and esports and those kinds of things which Carlos was a bit more into.

“So we would play golf every now and again and we’d play on the sim and race each other and do things like that. So one simple thing of becoming better mates is I guess spending time together and enjoying yourself and stuff.

“Playing golf was one of those things which made a lot of things better,” he stated.

The Brit is focused on yielding results

Norris has always had a light-hearted off-track demeanor. However, this should not be confused with a lack of focus.

The young driver has revealed that he has been considering “important things” this year.

His results have been spectacular this season, especially considering he has surpassed his previous best. Till now, he has gathered 101 points in contrast to 97 last season and 49 during his debut campaign in 2019.

Focusing a lot more on myself: Norris

“I am probably focusing a lot more on myself than I have done, spending more time on the important things, the things I really need to focus on which is my driving and having a performance like I have this year,” added Norris.

“A bit of that is focusing on things you really need to focus on in order to do a better job – spending time with my engineers and less time chatting and having fun and things like that.

“I’m not taking anything away from my enjoyment of Formula 1. I still love it and do everything that I want to do but just a bigger shift towards the focus and the work ethic side.

“It definitely has an effect but I can’t tell you how much,” he concluded.

We have seen Norris’ performances improve and can expect even better results in the future.