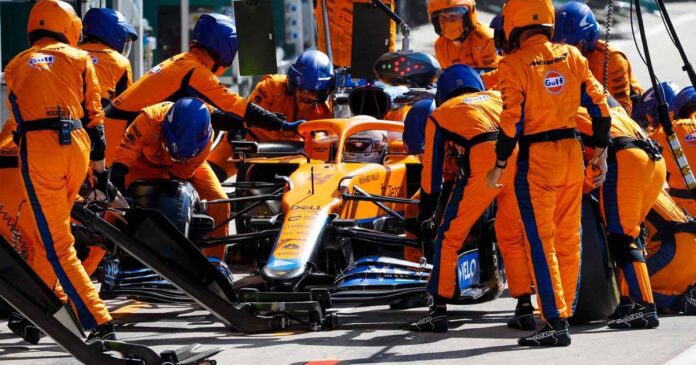 McLaren driver Lando Norris had a spectacular race during the British Grand Prix at his home circuit of Silverstone on Sunday afternoon.

With incredible pace throughout the entire weekend, the Brith finished P4.

When the restart took place, Norris was third, ahead of Mercedes driver Valtteri Bottas.

However, during a pitstop, he lost time due to a delay and lost his position. He made his frustration known over the team radio while coming out of the pitlane.

“F*cking great,” he exclaimed when he realized that he lost his position to Bottas and Alpine’s Fernando Alonso.

During an interview, he justified his reaction at the time.

“Of course those were my emotions at the time, not too happy to come out in that position,” he said.

Even during the interview, it was clear that the young driver wanted a fighting chance against Mercedes.

“I would have had a chance, I reckon. I had the motivation from everyone around to go for it and push for it,” he added.

What if the pitstop was not delayed?

Despite Norris’ significant achievements, he is desperate for more.

“I don’t know what we could have achieved, but at least here at Silverstone in front of the fans I just would have loved that chance to fight,” he said.

“We did hold them off, not easily but reasonably well in the first stint. We never got within DRS.”

The 21-year-old was happy with McLaren’s pace during the race. This is probably why the pitstop hurt him even more.

Norris went on to mention how the pitstop felt like it would never end.

“It does feel like a lot, yeah…At that point, all I needed was an alright pitstop and I would have come out ahead of Bottas.

“And then the worst thing was I came out behind Fernando, which meant I couldn’t push on the first lap at all,” he explained.

However, he had praises for his team.

“The boys have done a good job all season and they’ve made steady progress all the way throughout and the pitstops have been getting better and better, and this is my first bad pitstop I would say of the whole season,” he concluded.