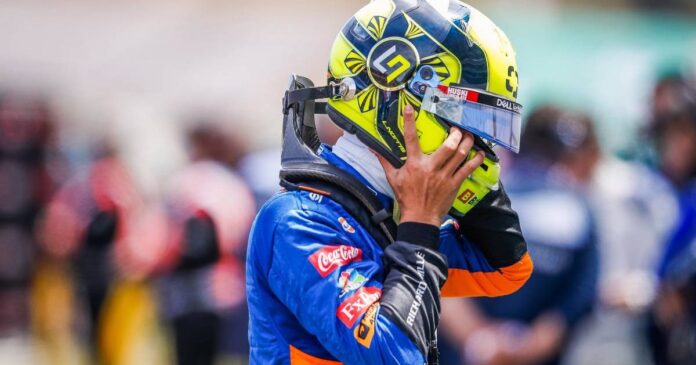 Last weekend, Lando Norris was involved in a traumatizing incident after attending the Euro 2020 final between Italy and England.

The McLaren driver had his expensive Richard Mille watch stolen from his wrist outside the Wembley stadium.

According to a statement released by the team, the 21-year-old was unharmed but ‘shaken’ after the mugging.

With the upcoming British Grand Prix, the young Brit has revealed that he is feeling the impact of the incident after getting his watch stolen.

The watch is a limited edition and is expected to cost around $100,000.

During a press conference, Norris stated that he is finding it difficult to move on from the entire incident.

“I’m not in perfect condition, I’m not going to lie, so yeah, some work to do mentally. Of course, I talk about that a lot, how mental health, mental strength is very important,” said McLaren’s driver.

“I’ve not been sleeping that great and so on, so yeah, not ideal and I’m feeling a bit sore. But, I don’t know, I’m not the guy in the worst position after Wembley.”

“I’ll work on it, I’ll make sure I’m feeling better and in the best shape possible, and I feel like I can still go out and focus on the job I need to do so, that’s the main thing,” added Norris.

Norris thanks his fans for their support

After the incident, the young driver was silent for a couple of days. However, he broke his silence by thanking his fans for their support.

“Hi world, thanks for all the messages, everyone. Really means a lot to see so many messages of kindness and love from you all,” he wrote on his Instagram story.

“Thought I’d let you know I’m doing well and trying to make sure I’m ready and in the right zone for this weekend to perform at my best. Love you all and can’t wait to see so many of you back at the track this weekend,” he concluded.

Norris has been in top form throughout the season and is the only driver to score points in all the nine races so far.

He is currently in the P4 spot in the driver’s standings, three points behind Sergio Perez.

Read More: Christian Horner accuses Hamilton of shifting the spotlight away from himself – “Lewis loves a bit of kidology”