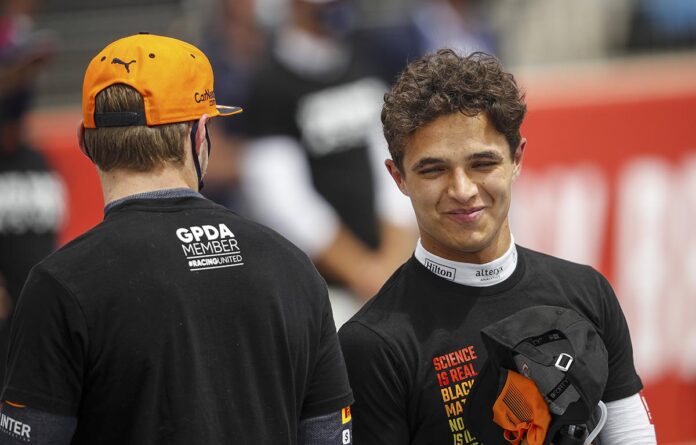 Lando Norris has been with McLaren for three seasons now and had a splendid start to the 2021 season with Daniel Ricciardo.

He has even managed to outperform a much more experienced Ricciardo by 86 points to 34 in the Drivers’ Championship.

In the eight races so far, the British driver has been on the podium twice.

He even has a better average grid position and average finish position in comparison to his Australian teammate.

Norris has revealed that Ricciardo’s joining the team has inspired him to perform better as there were ‘a lot more eyes’ on him.

“There’s been a lot of work I’ve done over the winter and still all the way through this year,” Lando said about his performance.

“And I guess with the addition of Danny coming into the team, there was a lot more eyes on what I’m going to be like versus Danny rather than the opposite way around.”

“Not many people knew how good Carlos is and this year Carlos has proved how good he is against Charles, whom everyone rates as one of the best drivers in Formula 1. I think it’s good for me to know where I stand compared to other drivers,” he said.

Sainz and Norris are close friends

Lando Norris and Carlos Sainz’s bromance is very popular on the grid for how wholesome it is.

However, the same cannot be said about the two McLaren drivers as their interests off the grid are not similar.

“[Daniel and I] still get on well, we still have good laughs, we’re still good mates and everything. But one simple thing is our interests away from the circuit are very different,” Norris said.

“He’s more into making wines and clothing and things and I’m more into golf and Esports and those kinds of things, which Carlos was a bit more into.

“One simple thing of becoming better mates is spending time together and enjoying yourself – and playing golf was one of those things that made a lot of things better,” he concluded.