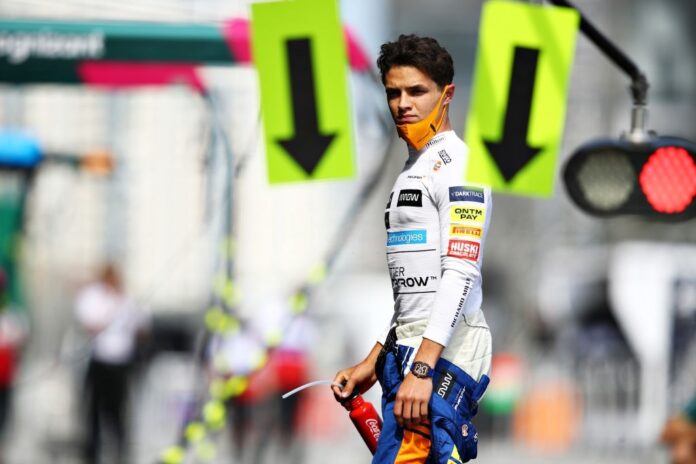 According to Lando Norris, Ferrari has been making a lot more mistakes than McLaren which has placed the British team close to them.

As a result, both the teams are locked in a fight for the P3 position in the constructor’s standings with a difference of just 2 points between them.

Even though Ferrari has a faster car than McLaren, they do not have many advantages over their rivals due to the mistakes they have been making.

“They are always making improvements, as are we, and we are trying to improve in every area,” Lando told reporters in France.

“They’ve been very quick on Saturdays. Charles has been on pole twice. But then they have made more mistakes and struggled more on Sundays. That is where we have gained some of it back and looked a bit stronger.

“So trying to continue that with the points being on Sunday and not Saturday, that is good for us and coming into our favour, but as a car, they generally have been quick in qualifying on Saturdays.”

One more reason why McLaren has been faring so well is Lando Norris himself.

He has been the only driver to score points in every race this season. Additionally, he has also finished in the top five in five of the total six races held so far.

Norris attributes this success to him being very reserved with his driving at times during races.

‘Even one or two points make a difference’

“It is good for me and us as a team,” Norris continued. “Especially from where we are in the constructors’; we are very close with Ferrari, so these kinds of things add up at the end of the season.

“Even if it is one point or two points, it can still make a good difference, so it is good. I’m doing what I can. It depends, sometimes you want to take more risks and go for a better position.

“But also I feel like I have made good decisions to be on the safer side sometimes and not take too many risks.

“Like in Baku, I was down to 12th after lap one and things are not looking so good. But I still ended up fifth. It is good for me and us as a team. And that is what we need to continue.”

Hamilton hits back at Marko’s comments on his injury – “I...