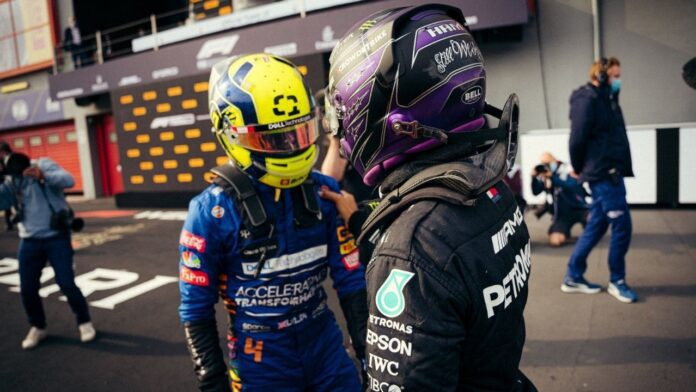 It is a common sight for drivers to praise each others’ performances, but rare to do so during a race.

This is exactly what happened during the Austrian Grand Prix where Lewis Hamilton offered his praise for Lando Norris for his driving around the Red Bull Ring.

While Norris was in front of Hamilton, he was able to defend his spot with sheer skill.

However, the seven-time world champion found a gap and made it through. But in the process praised Lando for his driving.

The Mercedes driver was having a difficult time trying to get past the McLaren driver.

But his persistence was able to hand him a window which left Lando in his rear-view mirrors.

“Such a great driver, Lando,” Hamilton said over his team radio.

Lando did show exceptional driving by earning a third-place podium finish, his third podium of the season.

The points he earned have cemented McLaren’s third place on the constructor’s list.

Hamilton did not have a great start to the race especially because he had to start from P4.

While he did manage to make his way up the grid and tail behind Max Verstappen, he suffered damage to his car.

As a result, he had to let his teammate Valtteri Bottas take the lead to try and counter the Dutchman.

Towards the end of the race, Hamilton was overtaken by Norris who went on to secure P3 leaving the Knight out of the podium.

Mercedes in a tough spot

Hamilton earned 12 points for Mercedes, but not enough to be able to fight off Verstappen.

Additionally, Red Bull has a 44 point lead over Mercedes in the constructors.

Now the Brackley-based outfit has two weeks to prepare a plan to counter a much faster Red Bull car at the British Grand Prix.

Since Monaco this season, Mercedes have not won a single race.