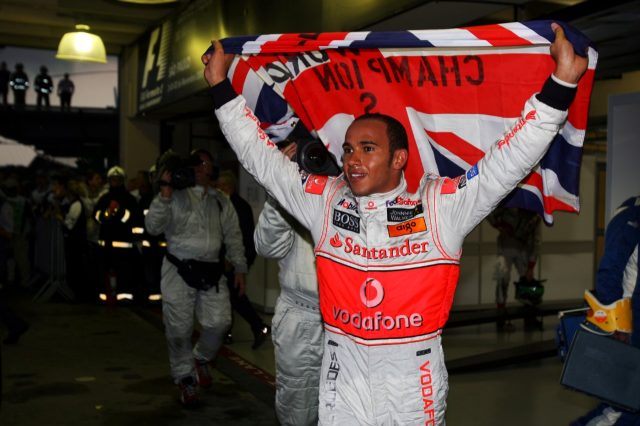 After finishing on the podium in his debut, Hamilton went on to set several records as he finished one point behind Kimi Räikkönen in the 2007 World Drivers’ Championship, including the most consecutive podium finishes from debut (9), the joint-most wins in a debut season (4), and the most points in a debut season (109).

Throughout the season, Hamilton and Alonso were involved in several incidents that caused tensions between the drivers and the team. This finally resulted in Alonso and McLaren mutually terminating their contract in November.

Following a successful first season with McLaren, Hamilton agreed to a multi-million-pound contract extension until 2012.

In 2008, Hamilton’s success continued. He won five races and finished on the podium ten times. Hamilton won his first title on the final lap of the season’s final race, becoming the youngest Formula One World Champion in history. Hamilton became the first British driver to win the World Championship since Damon Hill in 1996.

Hamilton continued to finish on the podium and win races during his final four years with McLaren. He entered the final round of the 2010 season with a chance to win the championship, but finished fourth as Sebastian Vettel won his first drivers’ title.

In the 2012 season, Hamilton won four races and finished fourth in the standings. To much surprise, Hamilton announced before the end of the year that he would be joining Mercedes for the 2013 season, replacing the retiring Michael Schumacher.

“We keep talking but nothing is fixed”: Potential Porsche-Red Bull partnership?

“It is not ideal”: Sebastian Vettel left with tears in his...