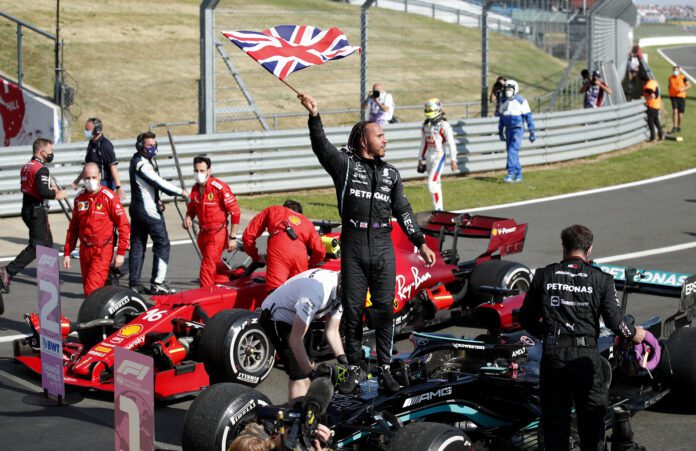 The fight for the finish line was at an all-time high during the entire duration of the British Grand Prix.

Just within the first lap, championship rivals Lewis Hamilton and Max Verstappen collided kicking the Dutchman out of the race. Max spun off the track after the collision and ended up crashing into the barriers with an enormous 51 G impact.

This led to a lot of name-calling and controversy on the paddock.

Between Mercedes and Red Bull, there was a lot of anger as they blamed each other for the accident.

Hamilton talks about the incident

After the race, Lewis Hamilton opened up about the moment the accident took place by stating that it always takes two for something this massive to happen.

“He [Lewis] says that he is open to talks with Max…” he wrote.

“For him [Lewis], it’s ‘Game on, just keep on attacking. There needs to be respect on the track-and if not this will happen more often I guess,” Barretto quoted Hamilton.

Both drivers were upset with the entire incident; Max losing out on the race and injuring himself and Hamilton with a 10-second time penalty.

Reactions to the collision

After the shock of the accident subsided and Verstappen walked out of the car unharmed but shaken, the brawl between the teams began.

There was finger-pointing, statement-making, and even emails being sent with detailed diagrams of the car crash.

The paddock was filled with chaos between the red flag and the green light for the restart.

“That was 100% Max’s corner. Full blame lies on Hamilton,” he said over the radio.

“I think it was a desperate move… Copse is one of the fastest corners in the world. You don’t stick a wheel up the inside. That’s just dirty driving,” he added in the post-race interview.

Mercedes boss, Toto Wolff, wasted no time in drafting an email to race director Michael Masi explaining how the accident was not Hamilton’s fault.

On the other hand, the internet erupted with chaos between Team Verstappen and Team Hamilton.

We were expecting drama at the British Grand Prix and drama is what we got.

While the two drivers involved in the accident are maintaining their calm, it is not difficult to sense the rage in their words.

Hamilton, after claiming his eighth win on home soil, had a grand celebration to commemorate the win.

“I just feel like he doesn’t need to be as aggressive as he is.” He added, ” I don’t think… that I am in a position to have to apologize for anything,” he said.

While Max was unable to talk to reporters, he made a statement from the hospital. He thought Hamilton’s post-race theatrics were “disrespectful and unsportsmanlike behavior.”

He also added that the 10-second penalty was not enough for the “dangerous move Lewis made on track.”

On to the next race

Between all the blame-game, Mercedes have a reason to celebrate, even if it is on account of Verstappen’s DNF.

With Silverstone ending the way it did, we can only hope that the two teams sort it out before the Hungarian Grand Prix.

Top priority: Why McLaren would have gone to any extent to...