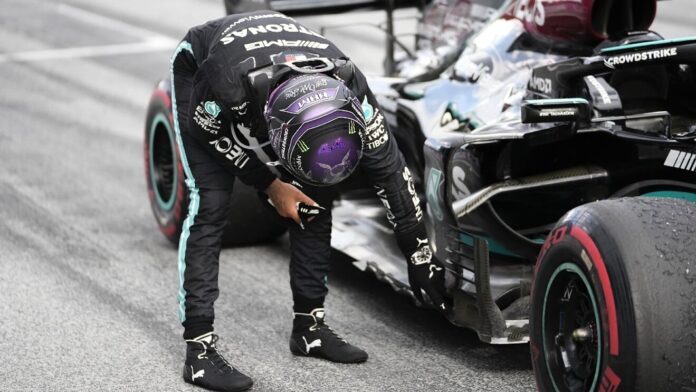 The Austrian Grand Prix was a disaster of a race for Lewis Hamilton after losing out heavily to Red Bull driver Max Verstappen.

The Mercedes driver finished 35 seconds behind the Dutchman. Verstappen was able to complete his first career grand slam and created a significant lead over his rival.

Hamilton started his race from P4 and finished it on the same spot. Additionally, he also ended up damaging his car.

This proved to be a major hindrance for him to challenge Red Bull and Verstappen.

Additionally, he also had to let his teammate Valtteri Bottas go past him to fight the race up ahead.

The seven-time world champion took to the team radio to confirm if he is racing his teammate.

Are we really racing each other?

Hamilton damaged his car while he was in P2. This led his teammate to catch him easily. The Brit was surprised to see Bottas so close to him during the race.

“Are we really racing each other?” Hamilton questioned over his team radio. His race engineer, Pete Bonnington answered, “We asked Valtteri not to race you at the moment. But he’s going to be under pressure from Norris.”

When Hamilton realised that he is losing time, he let the Finn overtake him.

“I am gonna let him [Bottas] by,” Hamilton said.

Later in the race, Lando Norris was also able to pass Hamilton and claim the last spot on the podium.

After Red Bull’s incredible performance in Austria, it is clear that Mercedes need to bring upgrades to their car.

The Austrian have been able to win five consecutive races and the Silver Arrows have no counter in sight. As a result, they will be looking to strike back during the British Grand Prix.

Mercedes might be at a slight advantage considering the implementation of sprint races from next week.

Additionally, the outfit will also be bringing upgrades to their cars which might support them during the sprint.

The new format might prove to be exactly what Mercedes have in mind and give them the required edge over Red Bull.