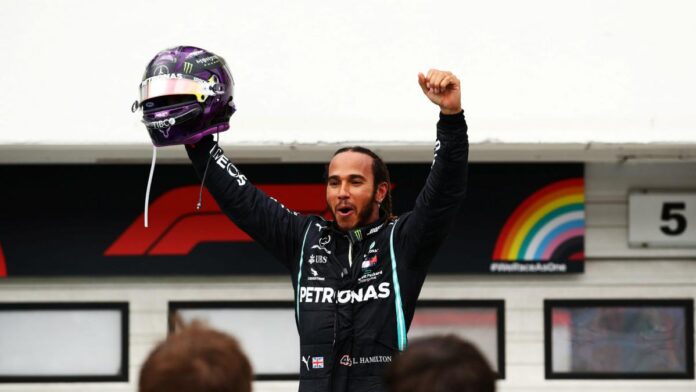 Sir Lewis Carl Davidson Hamilton is a racing driver from the United Kingdom.

Hamilton was born in Stevenage, Hertfordshire, England on January 7, 1985. His father, Anthony Hamilton, is black and of Grenadian heritage, while his mother, Carmen Larbalestier, is white, making him a mixed-race child; Hamilton has chosen to identify as black.

Hamilton’s parents divorced when he was two, and he was raised by his mother and elder half-sisters, Samantha and Nicola, until he was twelve. Hamilton then resided with his father, stepmother Linda, and half-brother Nicolas, who is also a renowned race car driver. Hamilton was raised as a devout Catholic.

Hamilton’s father gave him a radio-controlled automobile when he was five years old. The next year, Hamilton finished second in the national BRCA championship versus adult competition.

Hamilton was subjected to racist insults since he was the only black child racing at his club. When Hamilton was six years old, his father gave him a go-kart for Christmas and vowed to support his racing career as long as he studied hard in school.

Hamilton attended The John Henry Newman School in Stevenage, a voluntary aided Catholic secondary school. Hamilton began karate at the age of five to defend himself against bullying at school.

In addition to racing, he was a member of his high school’s association football squad, which included future England player Ashley Young. Hamilton, an Arsenal fan, stated that if Formula One had not worked out for him, he would have played football or cricket for his school teams. He began his studies at Cambridge Arts and Sciences (CATS), a private sixth-form college in Cambridge, in February 2001.

He now drives for Mercedes in Formula One, having previously driven for McLaren from 2007 to 2012. In Formula One, Hamilton has a joint-record of seven World Drivers’ Championship titles (equal to Michael Schumacher), as well as the most wins (98), pole positions (100), and podium finishes (170).

Hamilton was born and reared in Stevenage, Hertfordshire, and joined the McLaren young driver programme in 1998. This led to a Formula One drive with McLaren in 2007, making Hamilton the sport’s first black driver.

Hamilton established multiple records that season, finishing one point behind Kimi Räikkönen. The following season, he won his first Formula One World Championship in spectacular fashion, making a key overtake on the last corner of the last lap in the season’s final race to become the then-youngest Formula One World Champion in history. Hamilton joined with Mercedes in 2013 after four more years with McLaren.

Hamilton has been credited with expanding Formula One’s worldwide fan base by appealing to a bigger audience outside the sport, in part due to his high-profile lifestyle, environmental and social advocacy, and musical and fashion endeavours.

He has also become a vocal supporter of campaigning to condemn prejudice and promote greater diversity in motorsport. Hamilton was named one of the 100 most influential persons in the world in the 2020 edition of Time, and he was knighted in the 2021 New Year Honours.

Hamilton’s first Formula One season saw him team up with two-time and reigning World Champion Fernando Alonso. Hamilton is the sport’s first and, as of 2021, only black driver.

After finishing on the podium in his debut, Hamilton went on to set several records as he finished one point behind Kimi Räikkönen in the 2007 World Drivers’ Championship, including the most consecutive podium finishes from debut (9), the joint-most wins in a debut season (4), and the most points in a debut season (109).

Throughout the season, Hamilton and Alonso were involved in a number of incidents that caused tensions between both drivers and the team, resulting in Alonso and McLaren mutually terminating their contract in November. Following a good first season with McLaren, Hamilton agreed to a multi-million pound contract extension through 2012.

In 2008, Hamilton’s success continued. He won five races and finished on the podium eleven times, but he was also accused of arrogance and hazardous driving, but he said that his confidence was misinterpreted and that his driving was firm but fair.

As the season came to a close in Brazil, it became evident that the title would be decided between the home favourite Felipe Massa and the young Briton.

Hamilton was reunited with his childhood karting teammate, Nico Rosberg, when he signed for Mercedes in 2013. The move was hailed with astonishment by experts and the general public, with some viewing it as a gamble to join Mercedes, a squad with no previous history of success.

Hamilton won one race in his first season with the Silver Arrows, the Hungarian Grand Prix, where he converted an unexpected pole position into a winning margin of over 11 seconds over second-place finisher Kimi Räikkönen, along with a number of podium finishes and pole positions, finishing fourth in the standings for the third time in five years.

Four titles in a row

Hamilton set an all-time record with 11 pole positions that season, and his consistency (finishing every race in the points), combined with a lack of a serious challenge from his new teammate Valtteri Bottas, saw him record nine race victories and secure his fourth World Drivers’ title as he overturned a points deficit to Vettel in the first half of the season.

The 2018 season marked the first time that two four-time World Champions, Hamilton and Vettel, competed for a fifth title, and it was dubbed “The Fight for Five” by journalists and fans. Ferrari and Vettel appeared to have the upper hand for much of the season, topping the standings until the halfway point, as they had the previous season.

However, Vettel’s season unravelled due to several driver and mechanical problems, whereas Hamilton’s run of six wins in seven races in the latter half of the season saw Hamilton clinch the title in Mexico for the second year in a row, setting a new record for the most points gained in a season (408).

During the season, Hamilton signed a two-year deal with Mercedes worth up to £40 million per year, making him the highest-paid Formula One driver in history.

He also collected 14 podiums and ten pole positions. Hamilton was unable to compete in the 2020 Sakhir Grand Prix due to COVID-19, his first race absence since his debut in 2007. Hamilton won the 2020 Turkish Grand Prix with three rounds to spare, finishing the season 124 points ahead of teammate Bottas, who finished second in the standings.