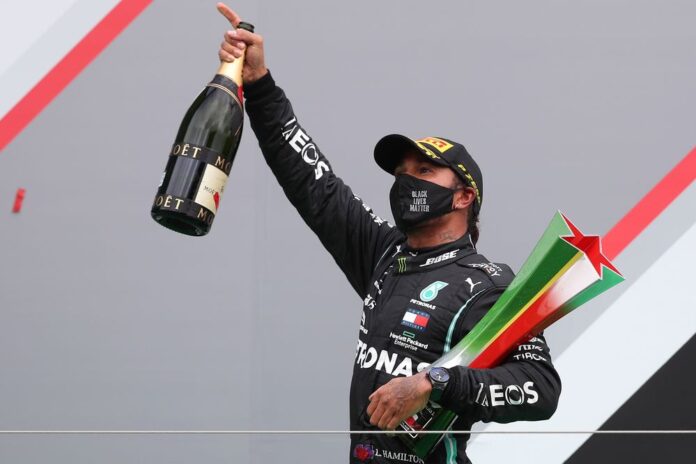 In a recent conversation with F1 legend Lewis Hamilton, Hollywood actor Christopher Meloni disclosed his newfound love of the sport.

Just like countless others, Meloni revealed that the Netflix series ‘Drive to Survive‘ gave him an insight into the working of F1.

Through a series of photos, the actor paid homage to the sport. Additionally, the two celebrities talked about their professions in an article for W Magazine.

What did the two stars discuss?

Meloni, on talking about the most interesting aspect of Formula 1, stated that he finds ‘data analytics’ during a race highly appealing.

“Your endeavor is so computerized and data-driven yet at the core of it, it’s up to you, the human, to make these split-second decisions, for the engineers to not screw the pooch… It’s a foreign language to me, and it’s an alien landscape,” he explained.

To this Hamilton agreed and even revealed that this was something that he struggled with during his initial years in the sport.

“The data that we go through, for me, probably has been the hardest thing to learn,” the Brit said.

Hamilton also went on the praise ‘the boffins’ on his team.

“The guys that I’m working with, they’ve all come from the top-end universities. They’re all just complete boffins…” he added.

The seven-time world champion was able to empathize with Meloni’s awe towards the sport.

“I grew up watching racing and having the viewpoint you have, and now I’m in it. When you’re in it, you don’t watch it from outside,” he explained.

Drive to Survive gets Hamilton’s approval

Christopher Meloni is just another name added to the list of people who got hooked to F1 after watching Drive to Survive.

“I really didn’t know about Formula 1. A friend turned me on to the series. I got to tell you, man, it’s one of these few shows that absolutely educated me and introduced me into a world that I had no idea about,” he exclaimed.

The Mercedes driver agreed with the impact that the series has had in favour of the sport.

“It’s been amazing to see the reactions to Drive to Survive. It is a difficult sport for people to tune in to because, of course, we all played basketball, football. We can all go and do that, you know? We can all try it at least, but not many people get to try driving a foreign car,” Hamilton concluded.

With Season 4 on the charts, for now, we can only wait and see what the series has in store for us.

Taboo: Drivers finally decide to speak up about one of F1’s...