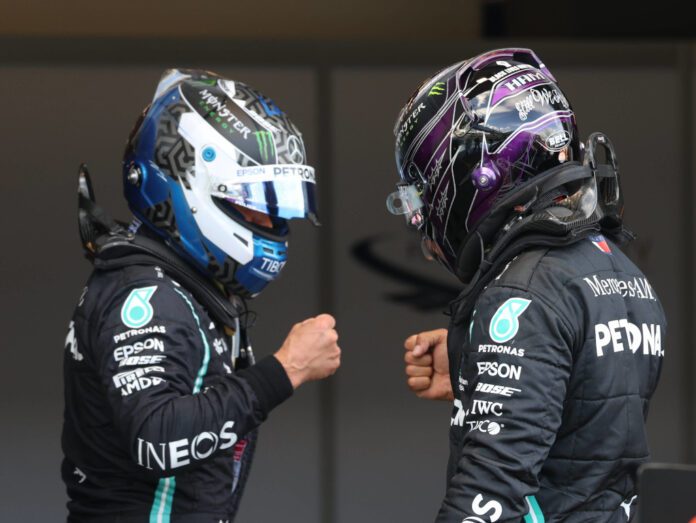 There have been a lot of speculations stating that Mercedes driver and Lewis Hamilton‘s teammate Valtteri Bottas will be replaced by George Russell.

This replacement could happen as early as the upcoming 2022 season.

However, no one from the Mercedes team has uttered a word about this matter leaving everything in a cryptic form.

During a press conference in Austria, Lewis Hamilton was asked this age-old question to which he gave a rather snappy reply.

During the interview, Hamilton was asked to present his opinions on the matter of Russell becoming his 2022 teammate.

He was first asked for “a word on George Russell,” to which the Brit replied, “doing what?”

The seven-time world champion was then asked the question about George Russell driving alongside him directly.

“Well he’s not my teammate currently. So I don’t need to say anything else,” Hamilton replied.

With Valtteri Bottas facing difficulty to match Hamilton’s pace, Mercedes have a requirement for a strong #2 driver.

So much is the difficulty for Mercedes that they have been replaced by Red Bull on the top position of the constructor’s standings.

Max Verstappen has been able to easily overpower Lewis Hamilton and as a result, he needs a strong partner to counter the outfit.

Despite rumours of Russell taking over Bottas, Hamilton has revealed that the Finn has been a fantastic teammate during the last five years.

He also added that despite the fallback they face in the recent races, there is absolutely no point in changing the line-up at the moment.

With many races still to happen this season, Bottas still has an option to prove his worth to this team.

“When I say teammate, it’s not just about driver performance,” Hamilton said.

“It’s about team morale, it’s about how you work in the teammate environment.

“Look, Valtteri is my teammate now. And both of us have had ups and downs in our careers.

“But as I said, I think he is a fantastic teammate. And I don’t necessarily see that it needs to change,” Hamilton concluded.