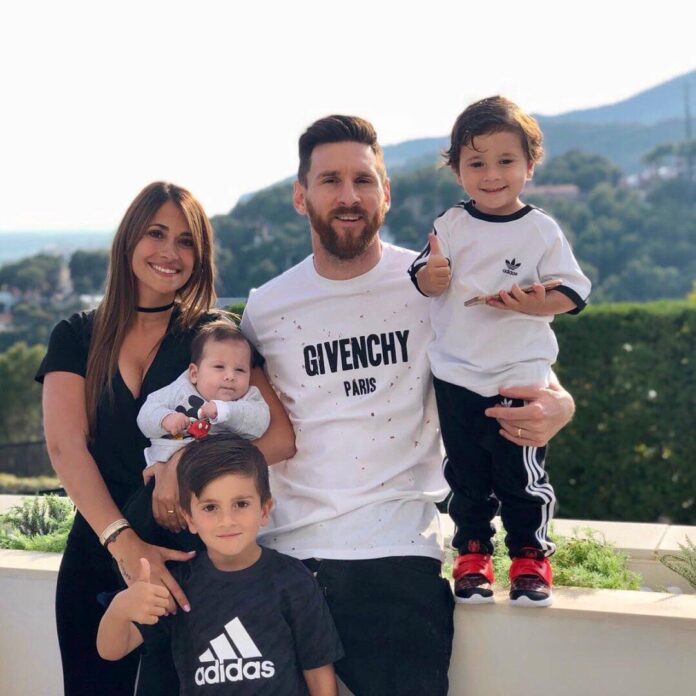 Lionel Andrés Messi, usually known as Leo Messi, is an Argentine professional footballer who plays as a forward and captains both Barcelona and Argentina.

Messi was born on June 24, 1987, in Rosario, Argentina, as the third of four children to Jorge Messi, a steel mill manager, and Celia Cuccittini, who worked in a magnet manufacturing facility.

He is of Italian and Spanish origin on his father’s side, the great-grandson of immigrants from the northcentral Adriatic Marche area of Italy and Catalonia, and mostly Italian ancestry on his mother’s side.

Growing up in a close-knit football-loving family, “Leo” had an early interest for the sport, playing frequently with his older brothers, Rodrigo and Matas, and his cousins, Maximiliano and Emanuel Biancucchi, all of whom went on to become professional footballers.

At the age of four, he joined the local team Grandoli, where he was coached by his father, but his maternal grandmother, Celia, who accompanied him to training and tournaments, was his earliest impact as a player.

He was deeply saddened by her death, which occurred shortly before his eleventh birthday; being a devout Catholic, he has since celebrated his accomplishments by looking up and pointing to the sky with respect to his grandmother.

Because the Messi family has relatives in Catalonia, they attempted to set up a trial with Barcelona in September 2000. Charly Rexach, the first team director, quickly wanted to sign him, but the board of directors was hesitant; at the time, it was extremely unusual for European clubs to hire foreign players of such a young age. On the 14th of December, an ultimatum was issued to Barcelona to demonstrate their commitment, and Rexach, with no other paper available, offered a contract on a napkin.

Messi was enlisted with the Royal Spanish Football Federation (RFEF) in February 2002, after spending a year at Barcelona’s youth academy, La Masia. Now competing in all competitions, he became friends with his teammates, including Cesc Fàbregas and Gerard Piqué.

After completing his growth hormone therapy at the age of 14, Messi became a key member of Barcelona’s greatest-ever youth team, the “Baby Dream Team” During his first full season (2002–03), he led the Cadetes A with 36 goals in 30 games, as they won an unprecedented treble of the league, the Spanish, and the Catalan cups.

During his fourth season with Barcelona, 2003–04, Messi advanced quickly through the club’s tiers, debuting for a club-record five youth teams in a single season.

He was named tournament player in four international pre-season events with the Juveniles B, although he only played one official match with the squad before being promoted to the Juveniles A, where he scored 18 goals in 11 league games.

Messi signed his first contract as a senior squad member on June 24, 2005, his 18th birthday. It extended his contract with Barcelona to 2010, two years shorter than his previous deal, but upped his buyout clause to €150 million. His breakthrough came two months later, on August 24, during Barcelona’s pre-season competition, the Joan Gamper Trophy.

As a starter for the first time, he delivered a strong performance against Fabio Capello’s Juventus, garnering a standing ovation from the Camp Nou crowd.

On 10 March 2007, he became the first player in 12 years to score a hat-trick in a Clásico, equalising after each Real Madrid goal to end the match in a 3–3 tie in injury time.

After winning the Supercopa de Espaa and the UEFA Super Cup in August, Barcelona won the FIFA Club World Cup on December 19 against Estudiantes de La Plata, with Messi scoring the winning 2–1 goal with his chest. At the age of 22, Messi won the Ballon d’Or and the FIFA World Player of the Year awards, both by the widest margins in each trophy’s history.

Unhappy with his position on the right flank, with the club’s summer recruit Zlatan Ibrahimovic taking the central forward position, Messi resumed playing as a false nine in early 2010, beginning with a Champions League last 16-round encounter against VfB Stuttgart. After a 1–1 tie in the first leg, Barcelona won the second leg 4–0 thanks to two goals and an assist from Messi.

At that moment, he basically became Guardiola’s tactical focal point, and his goal-scoring rate rose. Messi scored 47 goals in all competitions that season, matching Ronaldo’s club record set in 1996–97.

As Messi maintained his goal-scoring prowess into the second half of the season, he broke numerous long-standing records in 2012. On March 7, just two weeks after scoring four goals in a league match against Valencia, he scored five goals in a Champions League last 16-round match against Bayer Leverkusen, an unmatched feat in the competition’s history.

Messi finished the year with 51 goals, one more than Zlatan Ibrahimovic. After finishing second in the 2016 Ballon d’Or, Messi also finished second – this time behind Cristiano Ronaldo – in the 2016 FIFA Men’s Player Award on 9 January 2017.

After former captain Andrés Iniesta left the team in May 2018, Messi was chosen the team’s new captain for the next season. Following a 2–1 victory over Sevilla on August 12, 2018, he won his first championship as Barcelona’s captain, the Supercopa de Espaa.

On 19 May, in Barcelona’s final La Liga match of the season, Messi scored twice in a 2–2 away draw against Eibar (his 49th and 50th goals of the season in all competitions), capturing his sixth Pichichi Trophy as the league’s top scorer, with 36 goals in 34 appearances; with six titles, he tied Zarra for the most top-scorer awards in La Liga.

Messi, widely recognised as one of the greatest players of all time, has won a record six Ballon d’Or awards, a record six European Golden Shoes, and was nominated to the Ballon d’Or Dream Team in 2020.

He has spent his whole professional career with Barcelona, where he has won 34 trophies in total, including ten La Liga crowns, seven Copa del Rey titles, and four UEFA Champions Leagues.

He has almost 750 senior career goals for club and country, the most ever scored by a single club player.

Messi has been in a relationship with Antonela Roccuzzo, a Rosario native, since 2008. He’s known Roccuzzo since he was five years old because she’s the cousin of his childhood best buddy, football player Lucas Scaglia.

After keeping their relationship quiet for a year, Messi acknowledged it in an interview in January 2009, before going public a month later during a carnival in Sitges during the Barcelona–Espanyol rivalry.

Messi and Roccuzzo have three sons: Thiago, Mateo, and Ciro.

Messi is close to his personal family, particularly his mother, Celia, whose visage he has tattooed on his left shoulder. His professional activities are mostly managed by his father, Jorge, who has been his agent since he was 14 years old, and his elder brother, Rodrigo, who controls his daily routine and publicity.

In Rosario, his mother and other brother, Matas, manage his humanitarian foundation, the Leo Messi Foundation, as well as personal and professional affairs.

Read more: Lionel Messi net worth: What does the legendary football player earn and details about investments