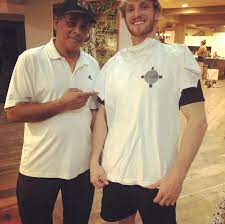 Milton Lacroix has been training amateur and professional boxers since the mid-1980s. One of his star students, Shannon Briggs, recently won the world heavyweight title. Briggs is a former WBO and lineal world heavyweight champion who was widely regarded as one of the world’s best heavyweight boxers during his prime.

Lacroix’s students wowed everyone at the NYC Golden Gloves in the 1980s and 1990s, winning multiple tournaments. He was a well-known trainer on the amateur circuit at the time.

Lacroix is also well-known for his work with amateur boxers in Florida. He has assisted many amateur and professional boxer in honing their skills and gaining a thorough understanding of the sport.

Paul began his training under Lacroix’s long-time student and former boxing world heavyweight champion Shannon Briggs. However, Paul parted ways with Briggs following his split decision loss to KSI in their rematch in 2019. Since then, the YouTuber has been working under Lacroix’s supervision.

Logan Paul has been preparing hard ahead of Floyd Mayweather bout

Lacroix has spent a significant amount of time on Logan Paul over the last few years. The amount of time he spends training Paul has increased significantly in preparation for his upcoming fight with Floyd ‘Money’ Mayweather.

Mayweather is a boxing legend who announced his retirement from professional boxing in 2017. He competed in an exhibition boxing match after retiring, defeating Japanese kickboxer Tenshin Nasukawa in the first round via TKO in December 2018.

Paul will face Mayweather in an exhibition boxing match on June 6th, 2021, at the Hard Rock Stadium in Miami Gardens, Florida.

Read more: Logan Paul net worth: Is the Youtuber-turned-boxer as rich as one may tend to believe?

McGregor’s dubious tactics against Khabib went unnoticed, but it could’ve been...