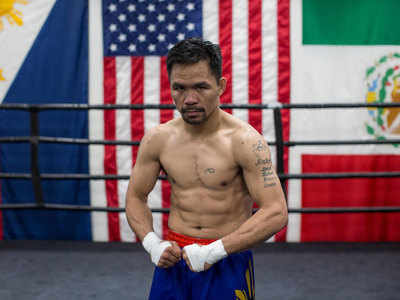 Manny Pacquiao Sr. is a Filipino politician and professional boxer. He is considered one of the best professional boxers of all time and is known as “PacMan.” He is presently a senator in the Philippines and the party president of the ruling PDP–Laban coalition.

On December 17, 1978, Emmanuel Dapridran Pacquiao was born in Kibawe, Bukidnon, a tiny municipality in the Philippines. He grew raised in a family of six siblings with his mother and father until sixth grade when his parents divorced. Pacquiao was inspired to participate in combat sports at an early age after witnessing Bruce Lee films and Mohammed Ali matches.

His family was impoverished, and as a result, he had to drop out of high school. Pacquiao began boxing at the age of 14 — the same year he left home to help his mother support his siblings. He has mentioned that he began boxing to live because it was something he knew he was excellent at while living on the streets.

Pacquiao turned professional at the age of 16, despite having previously secured a berth on the national Filipino squad at the age of 14. The government paid for his room and board, and he had an amateur record of 60 wins and 4 losses.

Manny Pacquiao, 16, was not legally authorised to fight since he was 4’11 and weighed 98 pounds. He then claimed that he stuffed weights into his socks at weigh-ins to compete. He defeated Edmund Ignacio in his first professional light flyweight fight.

Pacquiao returned to the lightweight division in 2008, winning his fifth belt in the process. The next year, he stepped up to the welterweight class, defeating Oscar De La Hoya after gaining weight to reach 148 pounds.

Pacquiao dropped to light-welterweight to face Ricky Hatton in 2009. He became a six-division champion after winning. Pacquiao set his sights on a new opponent after continuing to compete in the welterweight division — Floyd Mayweather.

Even though negotiations with Mayweather initially fell through, Pacquiao continued to face numerous competitors for the next five years, gaining even more belts along the way. Finally, in 2015, the two battled, with Pacquiao losing in a contentious decision. Pacquiao returned to professional boxing with a series of further victories after momentarily retiring following the fight, despite Mayweather’s refusal to rematch.

Manny Pacquiao is boxing’s only eight-division world champion, having won twelve major world titles. He was the first boxer to win the lineal championship in five different weight classes, the first boxer to win major world titles in four of the eight “glamour divisions”: flyweight, featherweight, lightweight, and welterweight, and the only boxer to hold world crowns throughout four decades (the 1990s, 2000s, 2010s, and 2020s).

Manny Pacquiao ran unsuccessfully for a seat in the Philippine House of Representatives in 2007. He again ran for a different district in 2010, where he was successful this time. Pacquiao campaigned for a senate seat in 2016 after becoming successful in Filipino politics. He won the seat and is deeply interested in the politics of his own country.

Manny Pacquiao has had a successful career in the entertainment world in addition to his sports and political careers. His appearances have largely been in Filipino films, though he did appear on Tosh.0 once. Rumours have also circulated regarding a probable appearance in Hollywood films.

On May 10, 1999, Pacquiao married Jinkee Jamora. They have five children: Emmanuel Jr. (Jimuel), Michael Stephen, Mary Divine Grace (Princess), who is a prominent YouTube vlogger with millions of fans and is the founder of the Pacquiao family’s YouTube video network, Queen Elizabeth (Queenie), and Israel.

His first son, Jimuel, came to famous status as an amateur boxer, model, and actor, while his second son, Michael, is a rapper with tens of millions of streams. Queenie, his daughter, was born in the United States.

On November 26, 2013, just days after Pacquiao’s victory over Brandon Ros, the Philippine Bureau of Internal Revenue (BIR) issued a freeze order on all of Pacquiao’s Philippine bank accounts due to his alleged failure to pay 2.2 billion in taxes for earnings made in his fights in the United States from 2008 to 2009.

A day after the bank account was frozen, the BIR issued an order freezing all of Pacquiao’s Philippine properties. Pacquiao then presented documents to the press showing the income tax for non-resident alien payment made by his promoter to the BIR’s US counterpart, the Internal Revenue Service (IRS), as well as a letter from Bob Arum.

Pacquiao, now a senator, approached Philippine authorities in April 2017 in an attempt to settle the matter. The BIR has held that taxes were required even if all taxes had previously been paid to the IRS.

Pacquiao commented on same-sex marriage in a video statement released by TV5 in February 2016. Pacquiao criticised people in same-sex marriages as behaving worse than animals because, in general, animals do not have same-sex mating.  LGBT celebrities slammed the Senate candidate’s remarks.

Pacquiao then apologised and stated that, while he is still opposed to same-sex marriage because it violates Biblical teachings, he does not condemn gay people individually. Nike discontinued their long-standing agreement with Pacquiao, citing his homophobic remarks. Pacquiao was also barred from entering the Grove at Farmers Market in Los Angeles.

Pacquiao stressed near the end of the video that he is not condemning gay people.

…but I’m not criticising them; I’m condemning the marriage, which is a sin against God.

— Manny Pacquiao’s stance on same-sex marriage is reiterated in a video statement released by TV5 on February 19, 2016.