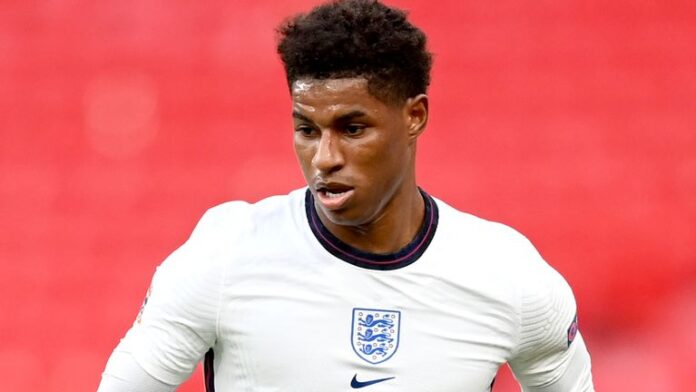 Marcus Rashford was born on October 31, 1997, in Manchester, and grew up in the Wythenshawe neighbourhood. His grandmother was born on the West Indian island of Saint Kitts, and he is of Kittitian heritage.

Rashford hails from a working-class household; his mother, Melanie Maynard, is a single mom who often had to work numerous jobs to feed their family, skipping meals herself to guarantee Rashford and his siblings ate.

He has two brothers, Dwaine Maynard and Dane Rashford, who both went on to represent him professionally, and two sisters, Chantelle and Claire. He is the cousin of fellow footballer Lois Maynard, who presently plays for Stockport County as a midfielder.

Rashford studied for a Business and Technology Education Council (BTEC) National Diploma in Sport at Ashton-on-Mersey School, where United has to send their academy players since 1998, close to their Carrington training base.

Rashford began playing football at the age of five at Fletcher Moss Rangers, initially as a goalkeeper, and cites former United goalie Tim Howard as his goalkeeping idol. Fletcher Ross Rangers academy development officer Dave Horrocks recalls Rashford being on a “different level” than the other lads, playing a key role in the team’s victory in a tournament attended by 15 scouts from other teams.

He spent a week training with Manchester City before joining the Manchester United academy system at the age of seven, despite interest from Everton and Liverpool. He credited his brothers with convincing him to join United.

Former United youth coach Paul McGuinness quickly recognised Rashford’s potential due to his athleticism both on and off the ball, but during his early years at the club, he frequently missed training due to his mother and brothers working, and eventually received assistance from youth coaches Dave Bushell, Eamon Mulvey, and Tony Whelan, who helped find drivers.

When he was 11, he became the youngest player ever to be chosen for the Manchester United Schoolboy Scholars scheme, which is normally reserved for players aged 12 and up. He was fast-tracked and started playing cage football alongside Paul Pogba, Jesse Lingard, and Ravel Morrison, which helped him improve his skill level by playing with players four years his senior.

Due to an injury crisis that saw 13 players injured, Rashford was named in United’s 18-man squad for the UEFA Europa League round of 32, second leg clash against Danish club Midtjylland on February 25, 2016. Rashford was selected to start the game when Anthony Martial was injured in the warm-up, and he made his first-team debut with two goals in the second half of a 5–1 triumph.

Rashford’s goals made him Manchester United’s youngest ever European competition scorer, breaking the record formerly held by George Best and later broken by Mason Greenwood in the 2019–20 season.

Three days later, Rashford made his Premier League debut against Arsenal, scoring twice and assisting on the other goal in a 3–2 home victory, marking him United’s third youngest Premier League scorer after Federico Macheda and Danny Welbeck.

Rashford was handed the number 19 by new manager José Mourinho for the new season to highlight his status in the senior squad. With the addition of veteran striker Zlatan Ibrahimovic, he was frequently relegated to the bench.

Rashford scored his first goal of the season against Hull City on August 27, 2016, scoring in the second minute of injury time after replacing Juan Mata in the 71st minute. Rashford played the majority of the season on the wing due to the arrival of Ibrahimovi. During the season, he made the most appearances of any United player, appearing 53 times.

Rashford made his debut appearance of his second full senior season on 8 August 2017 as a 46th-minute substitute in a 2–1 defeat to Real Madrid in the UEFA Super Cup. Five days later, on 13 August, he started in a 4–0 home win over West Ham United, assisting Romelu Lukaku’s first goal.

Rashford scored his first goal of the season three minutes after coming on as a substitute in a 2–0 win over Leicester on August 26. Rashford scored against Basel on his UEFA Champions League debut on September 12th, the third goal in a 3–0 win, marking the sixth competition in which he has scored on his debut. Rashford finished third in the 2017 Golden Boy award, trailing winner Kylian Mbappé and Ousmane Dembélé.

Mourinho rejected the prospect of Rashford departing on loan at the end of the season, pointing out that Rashford has been selected for practically every match of the season.

Rashford made his 250th appearance for the club in a 1–0 FA Cup win over West Ham on 9 February 2021, becoming the club’s fourth youngest player to do so.

Rashford was invited to an England under-16 training camp in 2012, and he was then chosen to participate in the Victory Shield against Northern Ireland under-16s in September and Wales under-16s in October.

Rashford’s performance in his first senior season prompted calls for him to play for England at UEFA Euro 2016. Manchester United academy coach Nicky Butt criticised these calls as premature and potentially injurious to Rashford’s development, as did England manager Roy Hodgson, who claimed Rashford should be allowed to “develop in peace”

Rashford scored his first goal in England’s Euro 2020 qualification campaign in a 6–0 away victory over Bulgaria on 14 October during the 2019 October internationals.

Rashford led England for the first time on June 6, 2021, scoring a penalty in a 1–0 win over Romania; he was the youngest England captain since Michael Owen in 2003, and the seventh Manchester United player to captain England and score in the same game. Rashford was nominated to the 26-man team for Euro 2020 and was assigned the number 11 shirt, although his place as a starter appeared to be in doubt heading into the tournament.

Read more: Marcus Rashford net worth: How much does the Manchester United starlet make through salary and endorsements