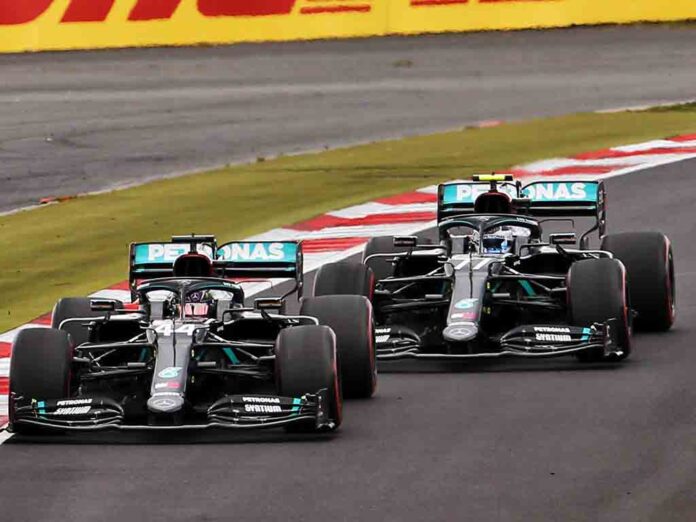 According to rumours, George Russell is expected to replace Valtteri Bottas and partner Lewis Hamilton for Mercedes in the upcoming season.

This is also the belief of former F1 driver Martin Brundle who claims that Russell will become the team leader ‘sooner rather than later’.

At the Sakhir Grand Prix last season, Russell stepped in for Hamilton when the latter contract the coronavirus. He was in line to claim a victory but lost out after a costly pit stop error.

With Bottas finding it difficult to keep up with his teammate, there have been calls for Russell to replace the Finn.

Hamilton has seen an extension in his contract which will see him drive for Mercedes till the end of 2023.

F1 legend Brundle is sure that Russell will be partnering with Lewis.

“It wouldn’t surprise me if George got the job alongside Lewis next season,” Brundle told Sky Sports News’ Craig Slater.

“If you were running Mercedes you’d look at it and say, ‘is Valtteri Bottas our man to win the championships when Lewis inevitable retires two, three, four more years into the future?’ You’d have to think no.

“I hate to say that, I really admire Valtteri, I think he’s a great driver and does an amazing job against the mighty Lewis Hamilton.

“But you can’t honestly say that if Lewis wasn’t there, Valtteri would be dominating instead.

“I think Mercedes have to get a young gun there that will emerge as their automatic young leader sooner rather than later,” he concluded.

While Russell has not yet scored any points for Williams, he came significantly close during the Austrian Grand Prix.

Mercedes on the other hand, have some serious points to justify regarding Bottas.

The 31-year-old is currently fifth in the driver’s standings and 58 points behind his teammate, Hamilton in second.

Russell is looking forward to the race in Silverstone.

“I can’t wait for it. It’s always a joy going to Silverstone to drive what is an amazing track and with 140,000 fans it will be buzzing for all of us,” he said.

“I think we all need and deserve it, not just drivers and teams but the fans as well. It will be so exciting for everyone.

“Fingers crossed the weather holds off. Hopefully, we’ve had our bad bit of the weather out of the way in the last couple of weeks in the UK and we can get some nice sunshine. It’s just going to be a mega-event all in all,” he concluded.