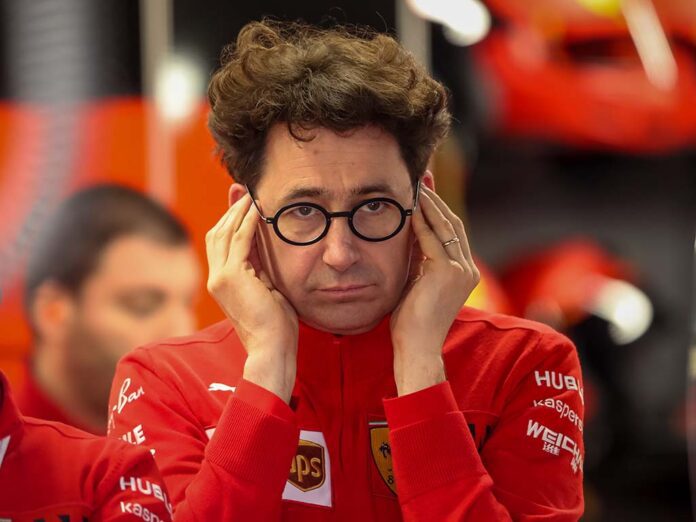 Mattia Binotto has downplayed the impact of the advantage Ferrari gained from last season.

Ferrari had a terrible 2020 season, but it came with a silver lining. Their finishing position mean they could have 40 runs in the wind tunnel. To put it into perspective, champions Mercedes only have 36. This seems to have improved their performance this season too.

In fact, they may well be the most improved team on the grid. Ferrari went from languishing in sixth last season to joint P3 with McLaren. Surprisingly, Binotto thinks the wind tunnel improvements aren’t that significant. He downplayed the impact of the advantage Ferrari received from last season.

As reported by Motorsport, Binotto said, “Obviously for the position we finished last year, we’ve got some more time at the wind tunnel.

“So yes, it is certainly an advantage, but it’s less than 0.1 seconds per lap. It’s still important, I’m still happy to have it, not because of the result of last year but because at least it’s something we’ve got in 2021.

“But we don’t believe that’s a game-changer. It is not,” he added.

Ferrari have had a resurgence this season. Their qualification and race pace have been good, and they have always finished in respectable positions. Binotto concurs with this, and has given the stats to back it up.

“If we look at the lap time, the pure car performance, let’s say quali last year–because we are all at the maximum performance… if we take the average of the entire season we were 1.4s off the pole and today we are 0.7 (seconds).

“So, 0.7 is still a distance, it’s not negligible, we are fully aware of it. But still, I think we halved the gap to the best,” he concluded.

Read more: Mattia Binotto unsatisfied with progress of Ferrari F1 Juniors – “Results not as good as a year ago”

Helmut Marko ecstatic after Styrian Grand Prix win – “We have...

Fernando Alonso hits out at those who crashed out during qualifying...