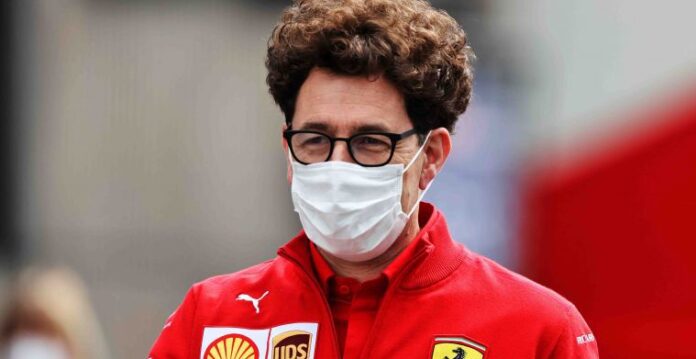 Ferrari team principal, Mattia Binotto, has been vocal about the recent developments in Ferrari’s pace, especially at the British Grand Prix.

He also admits that the car performs best when it is driven in free air.

Additionally, the tyre problems that the team faced back in France seem to have finally been resolved.

Ferrari has made progress since 2020

As compared to the 2020 season, Ferrari has made enormous progress. However, they still have a long way to go.

The Italians were in line to score their first win since 2019 during the race in Silverstone led by Charles Leclerc.

Binotto, as a result, sees a lot of improvement within the team.

“I think if you look at the Austria comparisons, [Lando] Norris has been on the podium doing a fantastic race,” Binotto stated.

“But if we analyze his race pace in Austria was very similar to ours but we were simply stuck in the traffic.

“And I think being ahead from the start of the race is key somehow,” he added.

There was also a noticeable difference in the speed between the two drivers. Leclerc was in the lead and faced no problems with his pace.

Carlos Sainz, however, was stuck behind Daniel Ricciardo for a long time.

During the race in Britain, Leclerc drove in the lead for 49 laps without facing any difficulties.

This also helped him overcome his tyre problems.

Binotto, however, claims that the team no longer has any problems with their tyres as they have finally been resolved.

“After France where we had front tyre problems, I think that the team regrouped, worked on it, and somehow understood the weaknesses and somehow tried to address it,” he said.

Alonso snubs Hamilton for Verstappen – “It makes Max the best...

Lewis Hamilton was lacking confidence from the beginning: Nico Rosberg