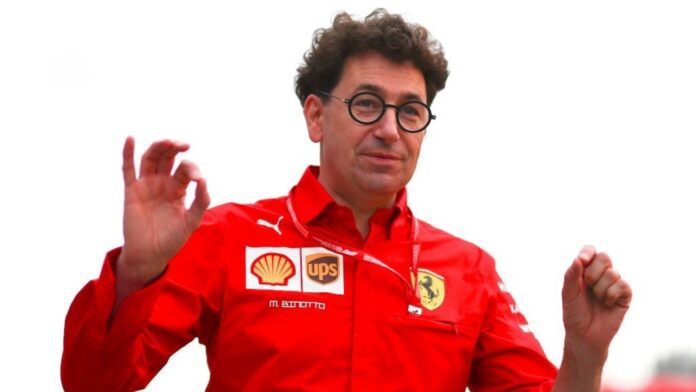 Ferrari F1 team principal Mattia Binotto has offered his support to Red Bull after a clash concerning their power units broke out.

This comes after there were questions raised over how the 2021 Honda power unit was developed.

Both Mercedes and Red Bull have been involved in a major scuffle both on and off track.

Binotto, however, seems to disagree with Wolff.

“I have read and heard some things regarding the Honda engine and I do not agree with what I have read,” Binotto stated in an interview with Corriere dello Sport.

“Honda has replaced some parts of the engine to improve the reliability of the power unit and with that they have solved their problems.

“Having solved the reliability issues with it, they can now fully exploit their potential again.

“So I don’t see any difference between the power the Honda engine showed during the test days in Bahrain compared to the horsepower they had in the past races.

“After Bahrain they have had to run with a somewhat throttled engine due to reliability issues, but given that the reliability issues have been resolved, they can now fully exploit their potential again, so it makes sense.”

Mercedes was distracted as Red Bull picked up pace

Binotto also compared the two teams stating that Red Bull’s rise to power was in the backdrop of Mercedes’ management issues.

“At Red Bull you can now see the result of years of hard work,” Binotto explained.

“Despite the fact that the team has won little in recent years, they have always stuck to Christian Horner and his engineers.

“They have always kept working on improving the chassis and it pays off now out, while at Mercedes the opposite is happening,” he said.

Binotto also mentioned that Mercedes have been busy with problems unrelated to those on the track.

“Already in 2020 Mercedes was busy with all kinds of management matters,” he said.

“Things were changed in the structure and the contract with Lewis Hamilton was only extended in February of this year.

“Those kinds of things are distracting and that is never good.

“That’s why we are at Ferrari We are also so focused on ourselves, so that we again create a stable basis from which we can perform,” he concluded.

We are yet to see how the second race in Austria will turn out for the teams.