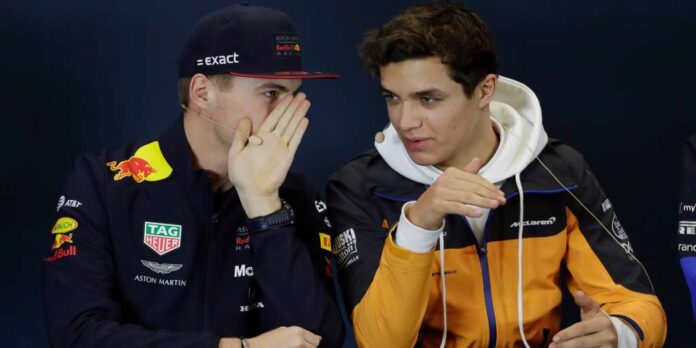 The highlighting feature of the Austrian Grand Prix on Sunday was the number of penalties issued during the race.

The FIA seemed to be agitated as drivers faced five-second penalties for minor reasons.

The penalty streak began with Vettel’s three-place grid penalty and then moved up to a total of seven. Also, eleven drivers were summoned by the stewards after the race.

Lando Norris was shocked at receiving his penalty which seemed borderline ridiculous.

Following his incident with Sergio Perez, Norris was given two penalty points.

Even though the Brit has lost the two penalty points he got during the Styrian GP last year, his number is appalling.

The 21-year-old driver is considered to be the least aggressive on the grid.

The race winner Max Verstappen is on Norris’ side when it comes to the penalties.

” I don’t think with the things you got the penalty points for, let’s say you would get to 12, you don’t deserve a ban for that,” he said.

“We should look into that [system].”

Back in 2014, the FIA introduced a licensing system to keep driver activities in check.

Every driver, to compete in Formula 1, requires a user license. But if this reaches a maximum of 12 points, the driver faces punishment from the system.

The FIA has the power to ban repeat offenders. However, these points are valid for a period of 12 months after which they are removed.

A driver gets banned from one race if the 12 points are reached. However, it is rare for a driver to reach the 12 point maximum and almost unheard of.

As a result, many drivers are against this system.

Norris close to a ban?

If a layman looks at these incidents, there is nothing wrong with them. Norris says that while driving at high speeds, one has to take decisions to see what is safe.

“But for little things like this is just stupid in my opinion, it’s not what Formula 1 should be,” Norris argues.

After deducting two points from last year, Norris has to race knowing that he is just 4 points away from a ban.