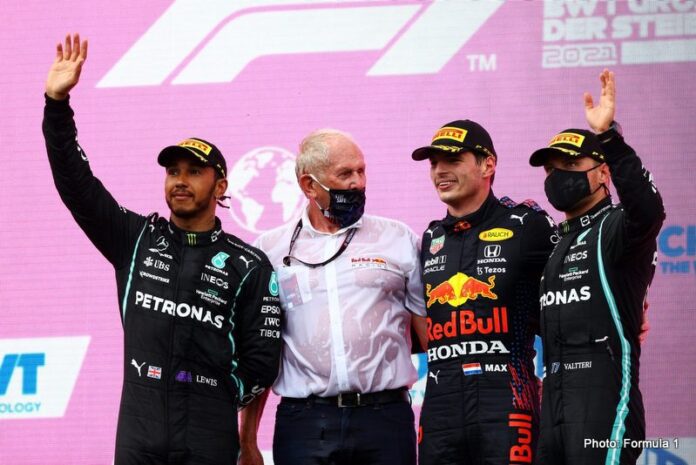 Following a conversation with Max Verstappen and Sergio Perez for the new Talking Bull podcast, it’s clear that the two drivers have gotten along well.

The duo also got an insight into the whims of Red Bull advisor, Helmut Marko.

Both of them shared a joke on Marko’s winning moment on the podium in Austria. They also mentioned the doctor’s disapproval of betting, something that Max Verstappen has experienced firsthand.

What were the jokes?

The comical moment began when the two drivers were contemplating more podiums for the team in the current season.

The two were immediately reminded of the podium in Austria. Max had emptied his champagne bottle over the Austrian’s head.

“I thought Helmut was already getting a heart attack here on the podium”, Verstappen began.

“He was all out of breath because we were trying to spray him with champagne, but of course the mask was in front.

“Then his whole shirt was getting wet, so everyone could see the Doctor’s sixpack. Did you see the sixpack? He’s strong,” he joked.

The Dutchman was asked if he had ever had a bet with the doctor. Verstappen disagrees but claims that he has tried a few times.

“We have been so close so many times [to making a bet]. The last few football matches of course, but he always backs out in the end”, Max said.

“Just before we make a bet, he thinks: ‘No, I don’t trust the guy.’  He only bets when he feels really comfortable. I also don’t really like betting, but who knows, maybe in the future,” he concluded.

Red Bull are currently leading the pack in the constructors and Verstappen is at the top of the driver’s list.

Their focus for the moment is to defeat Mercedes in the upcoming race in Silverstone.