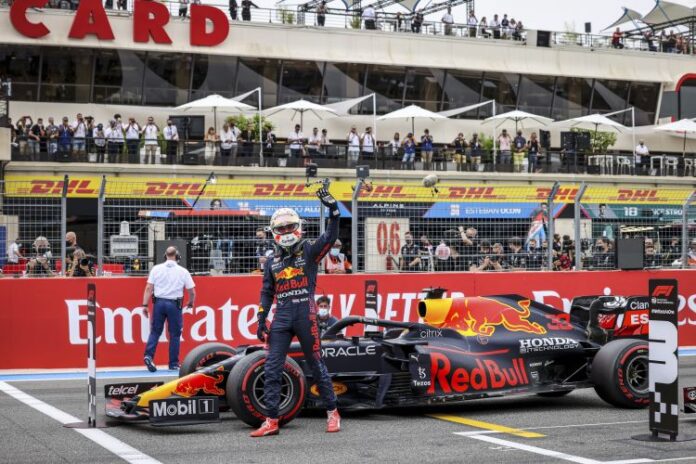 Verstappen managed to extend his lead over Hamilton after he hunted him down and overtook him with grace.

This is the Dutchman’s third win in the seven races so far this season.

“Towards the end I enjoyed it! At the beginning it was super difficult out there with the wind,” said Verstappen.

This victory gives Red Bull a hattrick win after races in Monaco and Baku.

With Hamilton coming in second, Sergio Perez came in third and Valtteri Bottas came in fourth.

Verstappen had a difficult start

Verstappen, however, did not have a picture-perfect start to the race after he went off-track coming out of turn one giving Hamilton the lead.

Around the 53rd lap mark, Hamilton had managed to create a gap of almost three seconds between him and Verstappen.

Then on lap 20, Hamilton decided to pit which pushed Max as the new race leader.

“We can’t keep this up until the end of the race that’s for sure,” Verstappen said to his team around lap 29 about his tyres.

Then on lap 32, he pitted again and resumed fourth with a 25-second gap with Hamilton. However, by lap 40, this gap was down to seven seconds.

Then on the last lap, Max overtook Hamilton to claim victory amid cheering from his team.

“The whole race me and Lewis were fighting each other, so it will be like this the rest of the season,” Verstappen said.

Read More: Daniel Ricciardo told to up his pace and match Lando Norris by race engineer