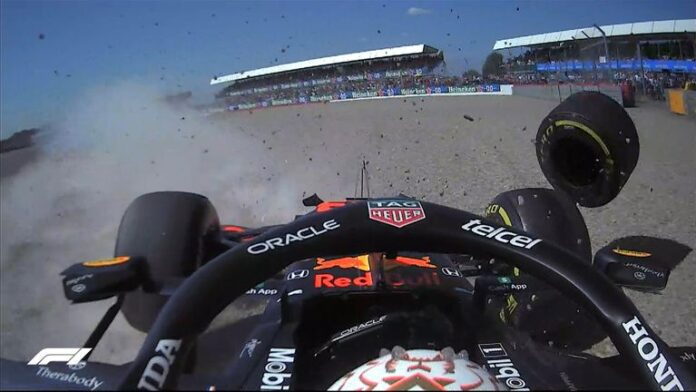 Red Bull driver Max Verstappen has been shifted to a hospital for precautionary checks following a massive crash in Silverstone on Sunday.

This comes after he had contact with Mercedes driver Lewis Hamilton on the opening lap of the British Grand Prix.

The two drivers were at the 180mph Copse Corner when the Brit tagged the Dutchman in his bid to overtake him for the lead.

Red Bull Team Principal Christian Horner revealed that Verstappen was ‘massively winded’ in the crash and transferred to the circuit medical center.

“Following an assessment by the trackside doctors at Silverstone Circuit Medical Centre, Max Verstappen has been taken to a local hospital for further precautionary tests,” Red Bull mentioned in a statement.

FIA Medical Rescue Doctor Ian Roberts was among the first on the scene of the crash.

What did Roberts say?

“He [Verstappen] was a little bit winded, to say the least. He got out with a little bit of help and is now off to hospital for routine checkups,” he stated.

“As we were coming round the corner it looked as if we were looking at a roll. Fortunately not but it was still a pretty impressive impact into the tyres.

“We assessed him as quickly as possible whilst he was still in, but obviously, he wants to get out.

“Get him just to try to relax a bit, because he wants to get out of there and we just want to know what he’s like and then get the resources in to get him to the medical center for assessment.

“There’s always a possibility of concussion, so we always bear it in mind. We like to then try to exclude that, but that’s always the first thing – even if it looks like it isn’t,” he concluded.

As a result of the crash, Hamilton was handed a 10-second time penalty for causing a collision.

The race was restarted after a red flag but the seven-time world champion was able to claim victory at his home circuit of Silverstone.